People’s Action Party (PAP) Member of Parliament (MP) Lim Wee Kiak has retracted his criticisms of Malaysia for its handling of the flight MH370 incident.
Mr Lim, who is also the Chairman of the Government Parliamentary Committee for Defence and Foreign Affairs, had lambasted the Malaysian authorities in an interview with a local paper on 5 April.
Referring to what he described as the “many theories” which he said Malaysia was offering about the causes of how the plane went missing, Mr Lim said:

“If Malaysia didn’t have information, they should have just said they had no information, rather than come up with theories.”

He then cited how Singapore had done a better job than Malaysia in similar incidents in the past.

What he found “most appalling”, he said, was that “the plane was in the heart of ASEAN, flying towards Vietnam in the South China Sea.”

“Thailand, Cambodia and the Philippines all nearby. How could everybody miss the plane? If the plane really made a U-turn, wouldn’t somebody’s radar have caught it?”

In fact, it was later reported that Malaysian radar systems did pick up some signals.  To this, Mr Lim said if that were so, the Malaysians “should have shared this information early so as not to waste precious resources from many other countries including Singapore, and more importantly, time searching the wrong areas.”
Mr Lim’s remarks were criticised by some for being insensitive and for lacking understanding of the tough situation Malaysia was in, trying to deal with the global focus on the incident.
In response to Mr Lim’s criticisms, Senior Parliamentary Secretary (Foreign Affairs) and Senior Parliamentary Secretary (Culture, Community and Youth) Sam Tan said Mr Lim’s views do not represent that of the Singapore government.
Mr Tan’s statement said:

“The Singapore Government position has been clearly set out in the remarks by Minister for Foreign Affairs and Minister for Law K Shanmugam to the Foreign Correspondents Association on 28 March 2014, as well as by Prime Minister Lee Hsien Loong to the editors of the Asia News Network on 9 April 2014. It is an unprecedented and very difficult situation and, as Prime Minister Lee said, the Malaysian Government has done a ‘manful job’.
“Singapore deployed aircraft and ships in the search and rescue operations, and has conveyed that we stand ready to provide further support as needed.”

Mr Lim then issued a response to Mr Tan’s statement, and said he has “reflected” on his remarks about Malaysia and that he “agree[s] with the comments of our foreign minister [sic] and our PM.”
Mr Lim’s post: This is not the first time that DrLim has had to retract or apologise for remarks he made.
In May 2011, during the debate on ministerial salaries, Mr Lim said:

“If the annual salary of the Minister of Information, Communication and Arts is only $500,000, it may pose some problems when he discuss policies with media CEOs who earn millions of dollars because they need not listen to the minister’s ideas and proposals, hence a reasonable payout will help to maintain a bit of dignity.”

Following a public outcry over his remarks, Dr Lim said that “on further reflection”, his remarks were “inappropriate and incorrect.”
He said:

“On further reflection, I agree that the example I quoted regarding a MICA minister meeting the heads of telcos and saying that there may be some loss of face if the minister’s salary is low is inappropriate and incorrect. I withdraw those remarks and apologise for making them. Dignity cannot be and must not be measured purely in monetary terms.” 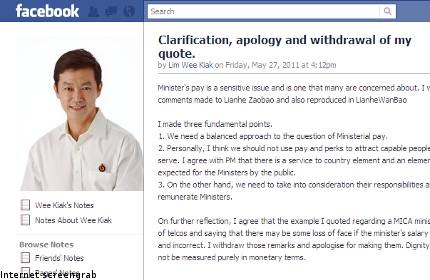 And just last year, Dr Lim had to again apologise – this time to opposition MP, Low Thia Khiang.
During a parliamentary debate, Dr Lim had charged that the Workers’ Party’s position on the number of new citizens differed from what Mr Low said during the previous year’s Budget debate. When Mr Low countered that his remarks had been taken out of context, Dr Lim said:

“I will quote (from your speech then) one more time. And maybe your hearing aid has to be (turned) up a little bit.”

Mr Low did not respond to the comment.
Dr Lim later offered an apology for the remarks:

“Madam Speaker, in the heat of the very passionate debate, I’ve made some very insensitive remarks about Mr Low. I would like to express my sincere apologies to the honourable member Mr Low Thia Khiang for my comments on his hearing aid.”