The Invisible Hand does not Produce Social Culture 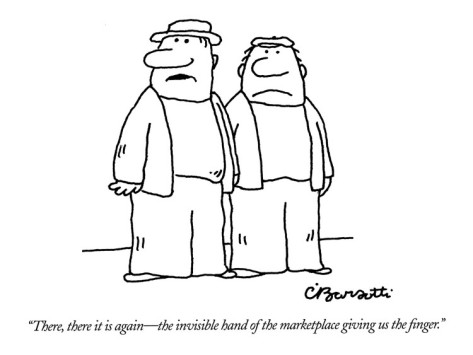 (Charles Barsotti’s Comic of the “Invisible Hand” of the market)

Although he also mentions many other things in his speech, such as the need to have jobs and better incomes over time, preserving a sense of social equity, and ensuring a fair deal between generations, it is rather confounding how he has mixed the most basic of economic principles, which is based on self-interest, with the social compact of help for others to get on their feet.

First of all, it is not clear at all on how a self-interested principle can lead to the kind of social culture that he perceives. The invisible hand that is often touted in economics can only work if people seek profit and put their full effort in creating the best products and processes because of this motivation. It allows the most efficient producer to dominate the market that the company or individual is in, which in turn maximizes the good for society.

But how is it possible for this principle to translate into a social culture that requires more than profit seeking? In effect, what Mr. Tharman is saying, if this principle applies to a social culture, is that anything that is not efficient or productive should be cast away, because it is not economically productive. There is a fundamental and important difference between having social facilities running efficiently, and having a social culture that should be productive, which Mr. Tharman has suggested, in his subscription to blind economic principles.

This very same ‘invisible hand’ that Mr. Tharman has suggested has also brought us the same economic depression that led to severe crises recently in 2008. The last recession, the worst since the great depression in the 1930s, brought the US and other large economies to the brink of collapse. It was lucky that Singapore had sufficiently and prudently regulated its banks, which would otherwise have been exposed to the same toxic products that the other banks have formulated, created, and sold to unwitting consumers.

Yet regulation and controlling the economic system is not simply a matter of luck. It is done by a careful consideration of what a free-wheeling, unbridled economic system can expose. That is, abuse of the system by rent seekers, exploitation of workers who have neither political nor economic power, regulating unscrupulous merchants who sell low quality or misleading consumer products. The invisible hand cannot, and can never do these things because there simply is no good interest for it to do so.

How this translates to a social culture then is simply confusing. How can a culture be created, that is social and professes to be in the interests of others, and yet be profit seeking at the same time, requires a leap of imagination. Not only will there be a culture where the social arena is riddled with profiteers seeking gain for the poverty, disability or loss of others, there will simply be no such culture. No social culture can exist where the only measurable gain is an economic gain, where the improvement of society is presided over the plight of others. It simply is delusional.

Let’s be fair, there are some positive qualities of the idea of the invisible hand that leads to certain desirable outcomes, such as the production of more goods and services for the well-being of society. But let’s not assume that it will necessarily create the entrepreneurial effort that society seeks. There is entrepreneurial effort, and there is hubris. The invisible hand encourages both at the same time. To conflate this with a social culture that embodies generosity, empathy, consideration and fairness, is not only mixing up two contradictory values that are directly opposite one another, it is simply unrealistic of what the ‘invisible hand’ can do.

Link to the speech by Minister Tharman Shanmugaratnam