Facebook user Phillip Ang made a post on Tuesday (24 Jan 2023) pointing out that the Indian Rupee (INR) has hit a new low against the Sing Dollar (SGD).

“It has been making record lows almost every month in 2022,” noted Phillip. “At the current rate of decline, will it not become banana money in the next 6 decades?” 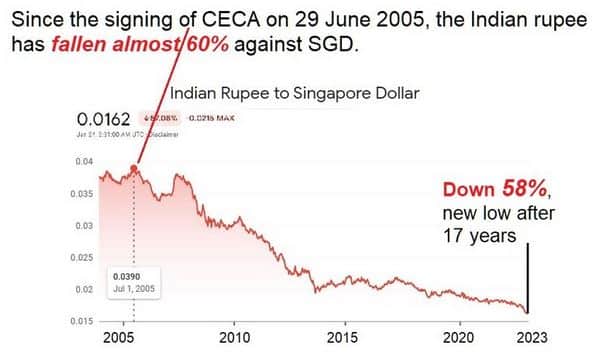 “The currency of a country as corrupt as India has only one way to go: Down,” quipped Phillip. So, even if the value of an investment in India in INR had remained the same since June 2005, in SGD terms, that investment would have still suffered 60% losses due to the INR-SGD forex exchange loss.

In fact, Phillip’s research also showed that the Indian Rupee has been suffering from free fall since six decades ago in the 60s: 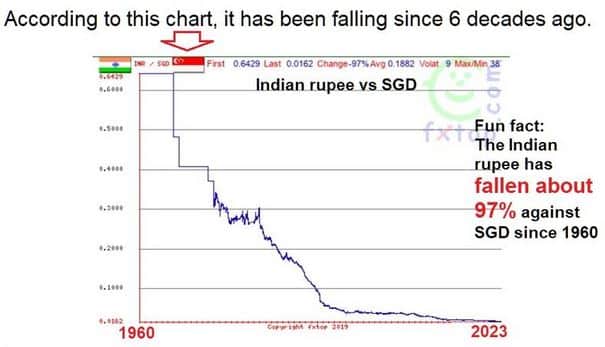 Phillip then asked a pertinent question, “Why would Temasek and GIC be investing increasing billions in a err … corrupt country?”

Making an oblique reference to the recent Keppel fiasco, Phillip questioned further, “Won’t corruption cases be too complex for CPIB to handle?”

According to Transparency International, an NGO which works closely with the UN, 89% of people thinks government corruption is a big problem in India while 39% of Indian public service users have paid a bribe in the country in the past 12 months.

And not surprisingly, Singapore is the leading contributor to India’s foreign fund inflows.
India’s Foreign direct investment (FDI) stood at $58.8 billion in 2021-22, with Singapore emerging as the top contributor among the list of 15 nations, according to a news report last year.
Indian PM Modi, who has recently been labeled by the BBC as the instigator behind the Gujarat riot targeting the Muslims when he was the Chief Minister in 2002, should be quite happy with the money coming from Singapore, which of course, emphasizes the importance of multi-racial harmony in the island state.
For just US$7.50 a month, sign up as a subscriber on The Online Citizen Asia (and enjoy ads-free experience on our site) to support our mission to transform TOC into an alternative mainstream press.
Tags: Singapore-India Comprehensive Economic Cooperation Agreement

Is Ong Ye Kung using the race card as a means to silence critics?