SG achieves average surplus of S$28.5b annually from 2010-2019 based on IMF accounting standard

Commenting on Mr Yeoh Lam Keong’s Facebook page, Mr Lee Hsien Yang, former CEO of Singtel shared a dated post of his, which states Singapore runs a massive budget surplus every year and the way it is calculated does not conform to accounting standards of the International Monetary Fund (IMF).

“The different method used by the International Monetary Fund shows a fiscal balance roughly 5 to 7 percentage points higher in 2011-15. This means the government has taken in from the public, including private business, more than it has given out every year, for nearly two generations. A public sector surplus always equals a private sector deficit, but the size and longevity of Singapore’s annual budget surpluses would be historically unprecedented worldwide in the post-feudal capitalist era.”

Responding to Mr Lee’s comment, Mr Yeoh who is GIC’s former chief economist commented, “excellent economic point on an alternative analytical perspective on our budget surpluses by a conservative and rigorous institution — the IMF itself!”

While the Singapore Ministry of Finance states in the latest POFMA correction direction issued to Mr Yeoh that the Singapore government receives a surplus of $2.2 billion per annum over the last two decades, SingStats’ data on Cash Surplus/Deficit based on IMF’s accounting standard tells a different story for the General Government Finance: 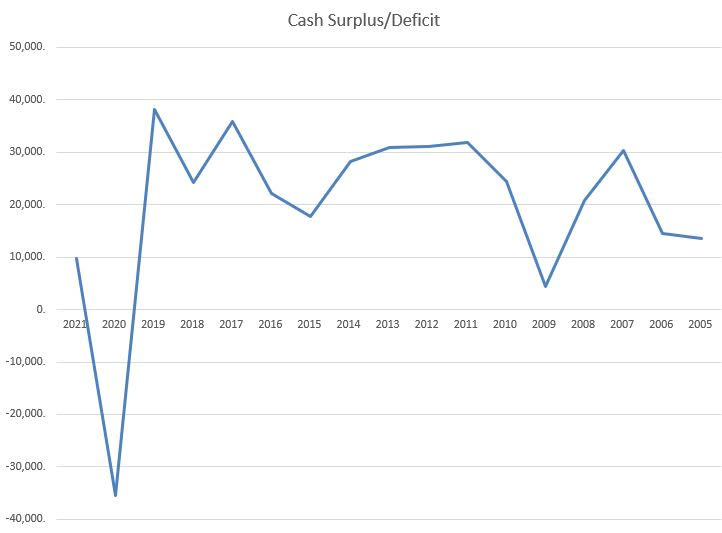 In fact, in the decade prior to Covid-19, based on IMF accounting standards, the cash surpluses were:

The footnote accompanying SingStats’ data noted that it is based on the IMF’s Special Data Dissemination Standards.

With regard to these huge cash budget surpluses as revealed by IMF data, the government has been trying hard to explain itself.

Last April, it issued a statement attempting to counter online comments that queried the need to raise the Goods & Services Tax, alleging that the government had more money at its disposal than what it had said.

The government acknowledged that the total cash receipts published by DOS in line with the IMF’s guidelines did include land sales receipts but said that such receipts do not represent what is available for the government to spend under Singapore’s budgeting rules.

It said that Singapore’s budgeting rules “are enshrined in Singapore’s Constitution”. Monies from the sale of state land are not considered as part of revenue for the government to spend.

“Cash receipts that are not considered revenue are not made available for direct Government spending, and instead are channeled to our Past Reserves and invested. It is misleading to point to such cash receipts to claim that the Government has more revenue than it presents in the Budget Statement,” it added.

The government also acknowledged that the largest of such cash receipts is the monies from the sale of state land. “Land is a scarce and finite asset in Singapore and forms part of our reserves. Selling land does not increase revenue. Instead, land sales convert physical assets into financial assets. The Government then invests these financial assets to generate a sustainable stream of investment returns over the long term, or use it for other land-related expenditure,” it shared.

“Land sales proceeds are not part of our revenue and cannot be directly used for expenditure,” the government reiterated. “Instead they are invested, and we use part of the investment returns to support the spending needs of Singaporeans.”

Relying directly on land sales for revenue for immediate spending is also not sound fiscal policy, it opined.

It also explained that the IMF’s guidelines are designed to provide a standardised way to report on the cash position of different countries and reiterated that such guidelines do not capture different budgeting rules and policy choices that countries and societies make.

“Using IMF’s guidelines to calculate the resources available for spending is inaccurate, as these do not accurately reflect Singapore’s fiscal position as defined by our own policy choices and context,” it said.

“Singapore has put in place a set of budgeting rules that reflect our values of prudence and stewardship,” the government defended itself. “How we present our Budget Statement reflects these values and aspirations.”

For just US$7.50 a month, sign up as a subscriber on The Online Citizen Asia (and enjoy ads-free experience on our site) to support our mission to transform TOC into an alternative mainstream press.
Tags: International Monetary FundSingapore surplus