Rysense earns profit from MCI-commissioned surveys, but how will these earnings be declared?

TOC’s earlier investigation on HappyDot.sg has led to the discovery of a “supposed-government company”, Rysense Ltd, which happens to be the sole proprietor of the online survey community.

What claims to be “a channel for Singapore residents to voice their opinions on real issues that impact Singapore”, as HappyDot.sg had stated on its website, turns out to be an entity under a research company headed by a bunch of senior civil servants.

Documents obtained from the Accounting and Corporate Regulatory Authority (ACRA) revealed that Rysense Ltd, the parent company of HappyDot.sg, is run by five directors – all of whom are the senior civil servants from the Prime Minister’s Office, the Ministry of Trade and Industry (MTI) or the Government Technology Agency (GovTech) – and one Malaysian secretary.

Rysense Ltd was declared as a Public Company Limited by Guarantee which was incorporated in December 2014.

Based on its website, the company focuses on conducting research “to understand what people in Singapore think, feel and do”, in which its primary areas of interest are “social trends and public opinion”.

“Using robust approaches, we seek to generate reliable insights about the Singapore landscape which reflect both subtle nuances and macro perspectives,” it wrote.

Rysense also explains its “in-house data capabilities encompass a wide variety of methodologies, including mixed-mode approaches such as focus groups, polls and surveys conducted face-to-face, over the phone or online”.

“Our office houses two fully-equipped focus group and observation rooms, as well as a computer-assisted telephone interviewing (CATI) facility which can accommodate up to 20 call staff at any one time.

“Our team of full-time researchers and analysts has over 50 years of collective experience in social science, communication and market research,” it asserted.

Nevertheless, as Rysense is declared as a Public Company Limited by Guarantee (PCLG), the company was not created to generate profits. Allocation of shares or capital is also not allowed.

Though PCLGs are prohibited from paying dividends or surplus to their respective members, they could retain the profits in the company or use them to achieve the companies’ objectives.

Rysense’s recent job advertisement on Jobstreet suggesting that the research company does generate profits by taking up projects with payments.

It posted a job advertisement on 22 October for the Head of Specialised Research and Business Development position, stating that “the primary responsibility” of this role is to grow the company’s business “to achieve financial revenue targets”.

The new Head of Specialised Research and Business Development at Rysense will be reporting to the director, and is expected to “partner the director to seek new business and engage strategic clients”.

Among the tasks of this position also involve working with the finance team “to closely monitor and report on financial metrics/performance of the business”. Apparently, it appears that Rysense has been taking up projects from the government, particularly from the Ministry of Communication and Information (MCI).

On 6 August 2018, MCI stated in a press release that it has engaged with Rysense to conduct an online survey on attitudes towards employment and skills upgrading.

Rysense also assisted the MCI to conduct the “News Consumption Survey” back in November 2018, in which the survey was found to contain questions with possible political nuances.

This was shared by Ervin Tan, who formerly represented Amos Yee as the latter’s defence lawyer. He posted on Facebook on 1 November 2018 that he was “asked to complete a survey by a person engaged by Rysense Ltd, which was in turn commissioned by MCI”.

Among the questions Mr Tan was required to answer were those related to “newspaper reading [habits], radio-listening habits, and social media habits,” which include the “source” of news and the “frequency of consumption” of said news source.

He noted that the survey also probed respondents’ thoughts regarding “the reliability of the sources of news” of their choice, before it “segued predictably into a very short segment on fake news” and whether respondents are able to discern fake news when presented with such news.

“Rather intriguingly,” he said, at the end of the survey, he was “asked (among other questions), on a scale of one to ten (being strongly disagree or strongly agree)” the following questions:

“Is Singapore headed in the right direction?”

“Is the Prime Minister doing a good job?”

When Mr Tan pointed out that “these questions were not relevant to news consumption”, the surveyor assured him that his responses will remain private and confidential. 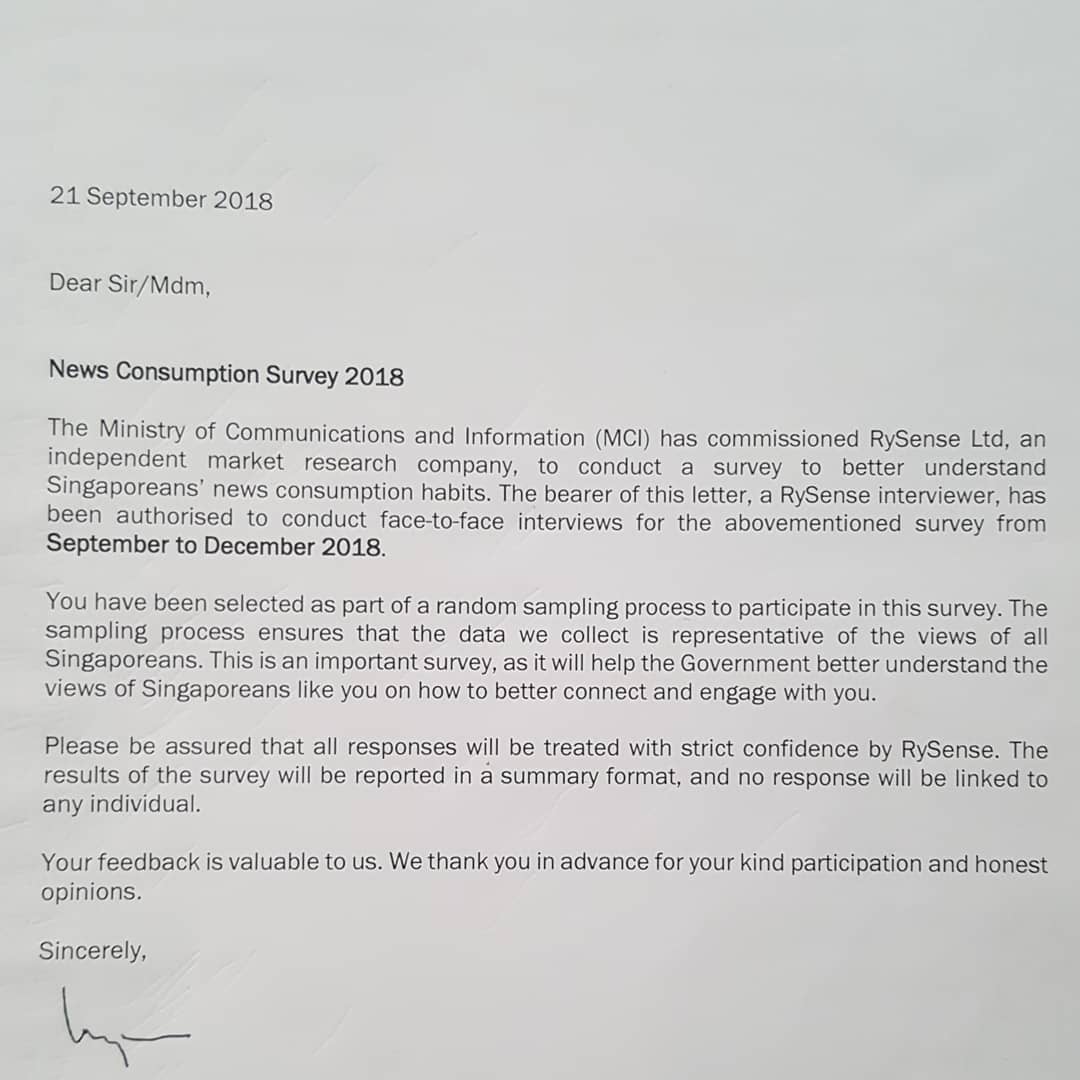 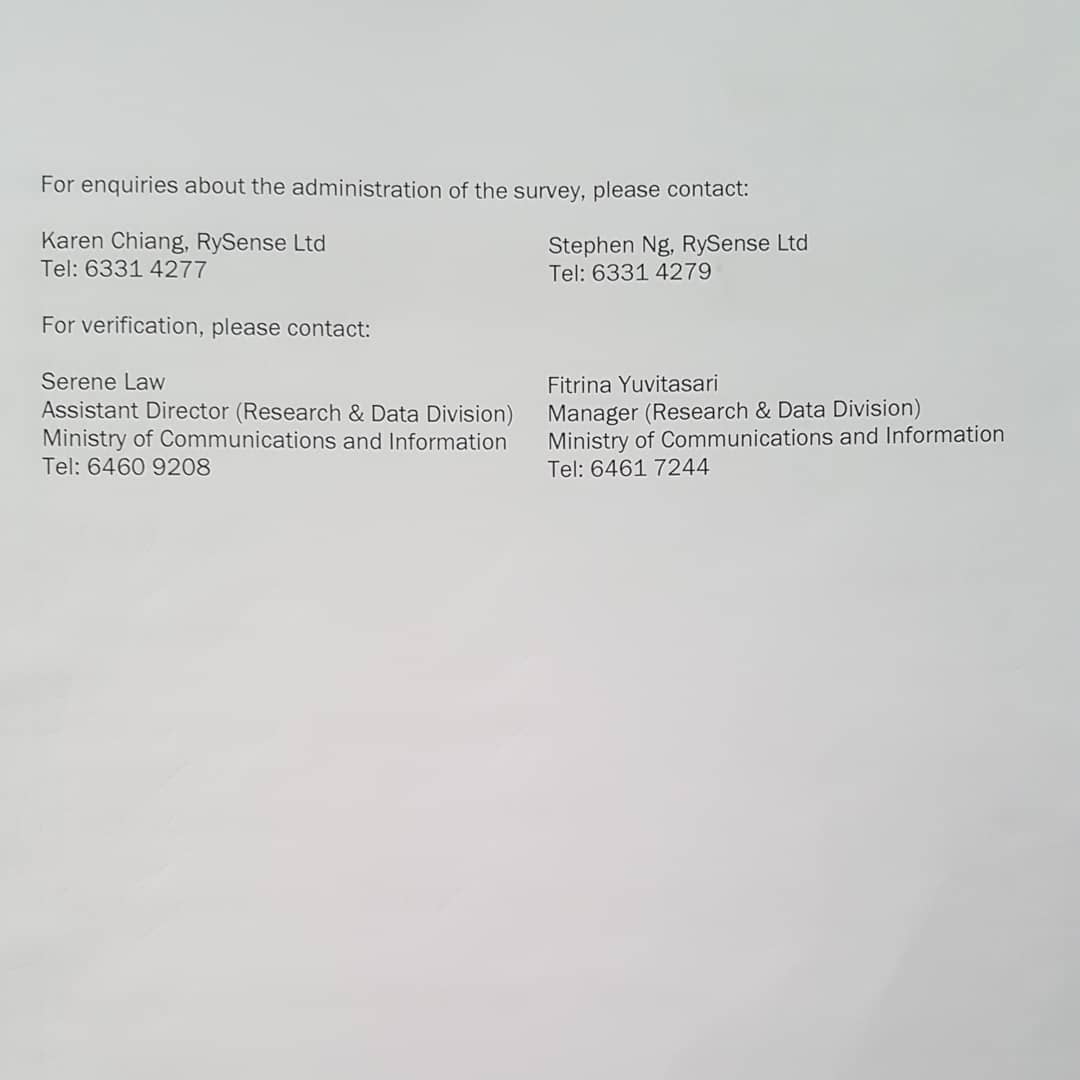 What’s more, Rysense had also conducted another survey commissioned by MCI in 2017.

On 18 September 2017, Singapore Democratic Party’s leader Chee Soon Juan shared on Facebook that he received a call from Rysense asking him to participate in a survey commissioned by MCI on “the arts and films situation in Singapore”.

Dr Chee claimed that “strangely the first five questions were about whether the govt was doing well, whether LHL [Lee Hsien Loong] was doing the right thing, whether Singapore was being led in the right direction and so on”.

Now, in the events where the company or its activities is funded by the government, will the company be required to declare its earnings as income derived from a ministry?

In Rysense’s case, does it needs to declare the earnings from these projects as payments deriving from the MCI?

Otherwise, will the revenues from these projects be “an isolated pocket” where it would be out the government oversight or Parliament’s knowledge? If this is the case, nonetheless, is it even legal?