A survey seeking to gather people’s views on the case of Parti Liyani was sent out by HappyDot.sg via an email recently, according to a TOC correspondent on Thursday (5 November).

For those who may be unaware of the case, Ms Parti is an Indonesian former domestic worker who was employed with ex-Changi Airport Group chairman Liew Mun Leong for eight years.

She was convicted by the State Courts in March last year of stealing S$34,000 from Mr Liew and his family but was acquitted of all theft charges by the High Court in September this year.

Ms Parti’s case has garnered widespread attention nationwide as it sparked debate on alleged lapses in Singapore’s justice system and the possible extent of its fairness.

Mr Liew has since stepped down from his roles as Chairman of Changi Airport Group and Surbana Jurong.

He has also resigned from his positions as a senior international business adviser at Singapore Investment company Temasek and as a board member of Temasek Foundation.

The purpose of the survey, however, was not specified, which prompted TOC to dig deeper on the company behind HappyDot.sg.

On its website, HappyDot.sg claims to be “a channel for Singapore residents to voice their opinions on real issues that impact Singapore”.

“Our survey topics range from hot-button issues and social trends to national concerns such as housing, healthcare, employment and our aspirations for Singapore’s future.

“We analyse the feedback and share it with institutions that matter because we believe this will help build a happier Singapore,” according to HappyDot.sg’s mission statement.

HappyDot.sg has conducted surveys on social issues such as what Singaporeans think of the issue of racial prejudice, sharing its findings in the form of a pie chart infographic via a paid promotional post on Facebook. 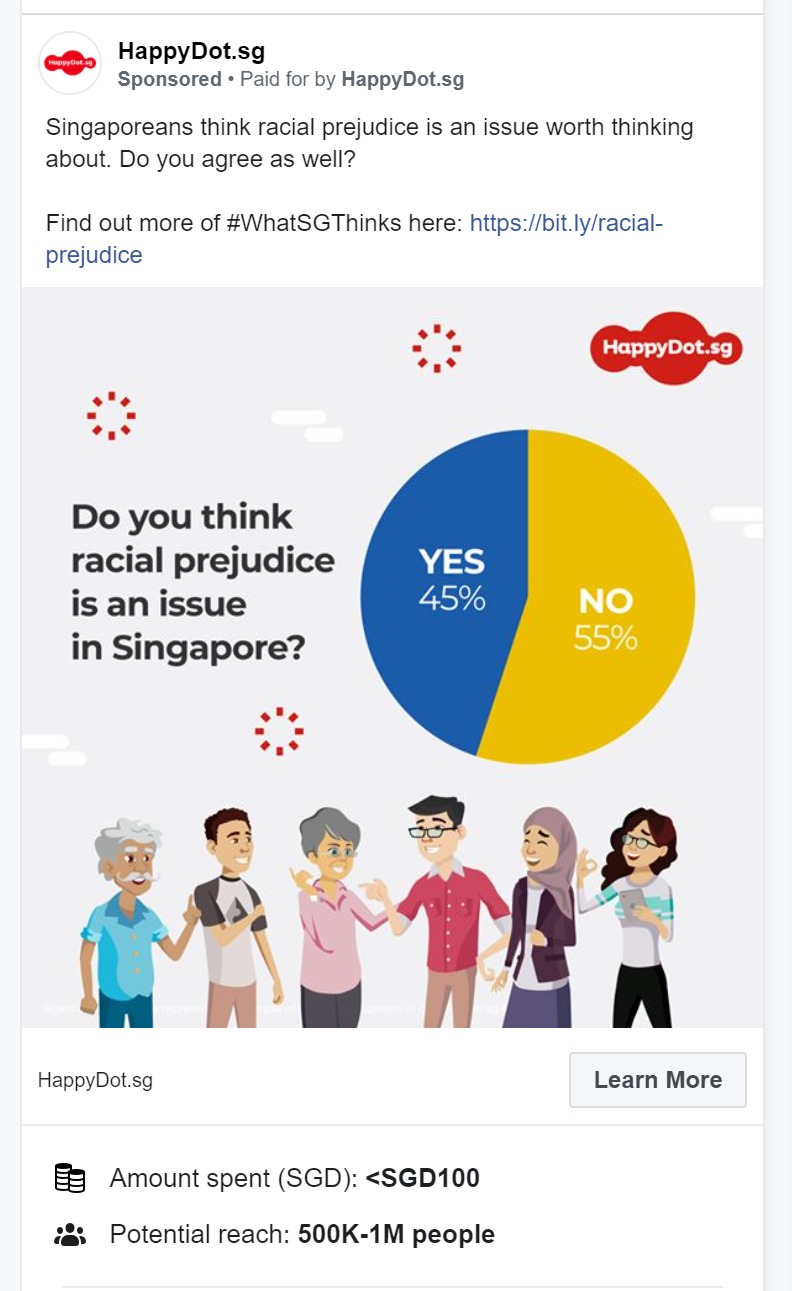 HappyDot.sg also rewards survey participants with vouchers or money, as stated below.

Under its Frequently Asked Questions section, HappyDot.sg merely states that it is “a local Singapore organisation that focuses on conducting social research” and “a company registered with the Accounting and Corporate Regulatory Authority (ACRA)”.

On the question of who the research it conducts is for, HappyDot.sg wrote that some of its surveys “are on behalf of organisations with an interest in specific social issues”.

“The HappyDot team also conducts our own surveys to find out how Singapore residents like yourself feel about a range of everyday topics,” it added.

As it turns out, the company who runs the online survey community is headed by several senior civil servants, TOC’s checks revealed.

Based on its business profile, which TOC had obtained from ACRA’s records, it was found that the sole proprietor of HappyDot.sg is Rysense Ltd.

Rysense Ltd, a Singapore-based research company, was declared as a Public Company Limited by Guarantee which was incorporated in December 2014.

The company is run by five directors — all of whom are the senior Singapore civil servants — and one Malaysian secretary.

The following names were listed as the directors of Rysense Ltd:

It is worth noting that civil servants in Singapore are prohibited from moonlighting or taking on a second job. They are required to seek approval before doing so, with approval considered on a case-by-case basis.

Moreover, these senior civil servants coming together as like-minded people to create a non-profit organization and conduct political surveys for the government seems absurd, considering that they are already hired by the government.

Either way, whether they were moonlighting or taking up duties as civil servants, both point to the possibility that someone must have given permission or instructions to them to do so.

Considering that these individuals work in different ministries, who might have given them such instructions if such is the case?

Since the surveys are conducted under a private limited (Pte Ltd) company, are the results going to be released to the government or to various entities at the Rysense’s directors’ discretion?

Further, as Rysense is declared as a Company Limited by Guarantee (CLG), the company was not created to generate profits. Allocation of shares is also not allowed.

The fact that Rysense was founded in 2014 also makes us wonder what other companies are owned by the research company besides HappyDot.sg.

One question, however, looms large: Who bears the cost?