On Monday (16 March), a video of Member of Parliament (MP) cleaning tables at a hawker centre started to circulated online, sparking public’s speculation that the general election may be held amid the Covid-19 outbreak.

The video showed the MP for Jalan Besar Group Representation Constituency (GRC) Dr Lily Neo wiping a table at Chinatown Complex hawker centre while accompanied by her team who handed her the paper towels for cleaning.

In the video, it can be seen that the team of Dr Neo who carried a sash with a slogan of “Keep Clean, Stay Safe” tried to approach customers and business owners at the hawker centre.

Besides cleaning tables, Dr Neo took to her Facebook on Sunday (15 March) to share that she had visited Beo Crescent Market and Chinatown Complex to promote good public hygiene by encouraging the customers to return the food trays in order to keep the tables clean.

In her post, she also highlighted that improving the hygiene of hawker centre is an important measure to strengthen the nation’s defence against the coronavirus outbreak.

Netizens not buying the action of Dr Neo, calling it “hypocrite” and “wayang”

Upon viewing the video that was circulating on social media pages, such as Mustsharenews.com and All Singapore Stuff, many netizens criticised that such “abnormal” behaviour of an MP is just a show before the elections. They described the move as “disgusting” while describing the MP as “hypocrites” or “wayang”.

One netizen pointed out that all these behaviours are sort of “publicity stunts” for all politicians during the elections period.

Few netizens slammed that those “winning vote” actions are disgraceful as good governance is the reason for voting. Some even asked the government to return the CPF money before asking people to vote on them. 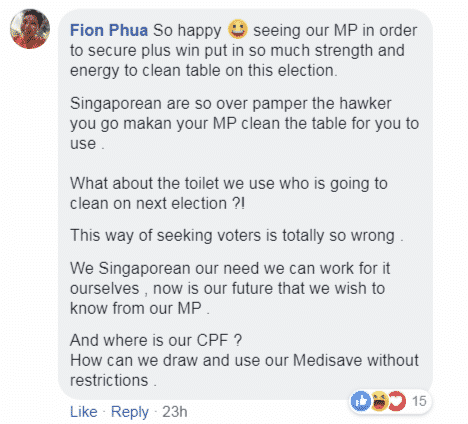 The other netizens said that people would choose the government based on what they have done for their people, not just by doing “this sort of wayang”.

Some netizens poked fun at the salary of MPs, saying that it is such a waste to pay a higher salary to MP for cleaning works, with some of others writing, “Nothing to do better than this?”, “Is this what you can do as an MP, what a waste of your talent as an Dr”.

Most of the netizens opined that an MP should know people choose them as a representative to voice out and solve the citizens’ problems. They noted that instead of cleaning tables at hawker centres, they would appreciate seeing their MP speak up in parliament and raise concerns over the issue that people are facing. 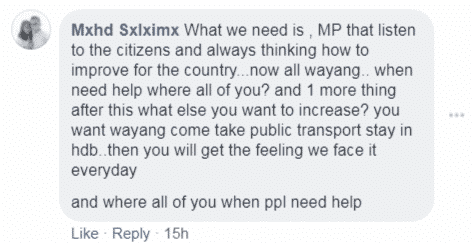 A few netizens wrote that it would be better for MPs to raise concerns over the issue on how to improve the lives of senior citizens and cleaners rather than cleaning the table themselves.

On the upcoming elections, a few netizens said that it is not appropriate to hold the elections in the midst of Covid-19 as it is risking public health for their hunger of power. 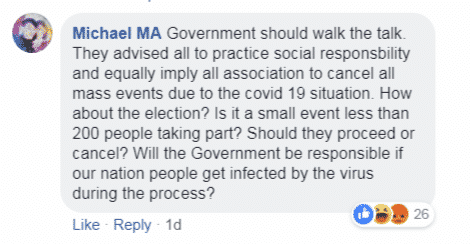