The People’s Voice Party (PVP) founding chief Lim Tean posted on Facebook earlier today (9 March), slamming the government for allowing crowded gatherings such as the Merdeka Generation event to take place which involved senior citizens, the most at-risk group to be infected with the COVID-19 virus.

During the inaugural Merdeka Generation Roadshow at ITE College Central on 2 June 2019, Prime Minister Lee Hsien Loong announced that 23 community roadshows will be held to engage the elderly on the benefits of the Merdeka Generation Package, TODAY reported.

The Merdeka Generation event was organised yesterday (8 March) next to the Commonwealth MRT station and outside of Sheng Siong. The event was jointly organised by the Health Promotion Board.

Following that, Mr Lim posted a couple of photos from the event and wrote that the authority should be encouraging the people, especially those who are the most vulnerable to the COVID-19 virus, to practice social distancing at this time, but instead it organised an event that led people to crowd together, thus increasing the risk of infection.

“This is the height of irresponsibility by the authorities. But of course these people will tell you that life must go on as normal, perhaps even more so now that the GE is approaching!” Mr Lim asserted in the caption. 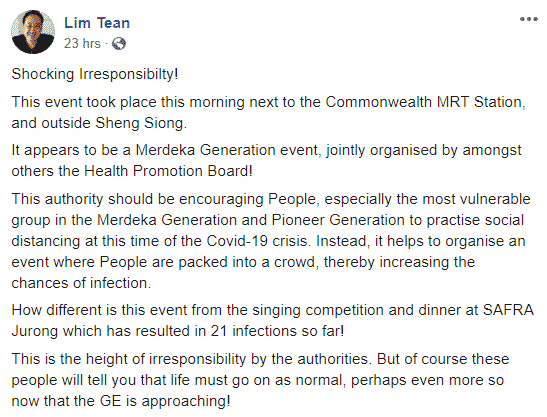 He wrote another post today indicating that the Merdeka Generation event was “madness” as it was held despite the risk of the COVID-19 infection to the elderly.

“The WHO have been very clear that the most at-risk group for Covid-19 are the over 60’s. So why on earth would this non-essential event be allowed to take place at this time? A time when our Covid-19 cases are on the rise?” he said.

Mr Lim also insisted on the resignation of the person who allowed the mass gathering event to take place, adding that if the People’s Action Party (PAP) is committed to containing the spread of the COVID-19 virus, it should postpone any gatherings that involve people who are over 60 years old.

“It is an abject failure by the PAP in the protection of our most vulnerable citizens in our society,” Mr Lim wrote. He went on to list the PVP’s action plan and urged the people to help stop the Merdeka Generation events to take place amid the COVID-19 crisis.

“Advise your older family members not to attend such events at this time,” he said.

He also instructed people to contact their Members of Parliament (MP) to demand for all events that will amass a crowd and involve senior citizens to be postponed.

“Email MOH with information about any such events scheduled in your area so that they can HALT them,” Mr Lim noted.

Mr Lim also suggested that a younger individual can attend the event on behalf of the senior citizen, but the person must take precautions such as wearing a mask, washing hands, and be careful when touching surfaces. 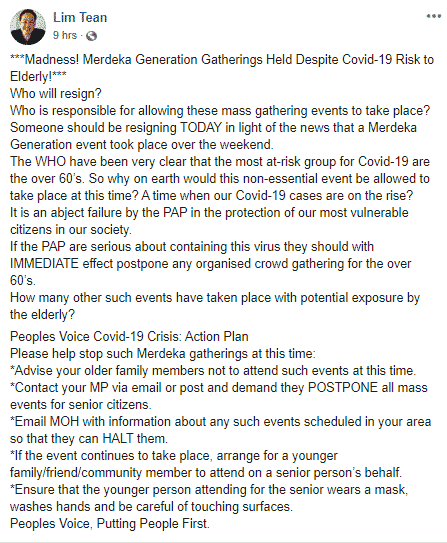 While the majority of the commenters agreed with the PVP’s founding chief points of view, some of the netizens opined that the Merdeka Generation event was part of the government’s preparation for the upcoming general election (GE).

Moreover, some commenters said that the government does not consider the COVID-19 as a serious issue, thus it still allows such crowd events to take place during the crisis.