The family of a 70-year-old Singaporean man who has been tested positive for the COVID-19 virus appeals to those who have recovered from the virus to be part of the convalescent plasma therapy trial as the patient is now in a critical condition.

The patient Zheng Yalie – referred to as Case 109 – works as a dishwasher in a Japanese Restaurant. He has sought treatment at a general practitioner (GP) clinic on 27 February. He went to the Singapore General Hospital (SGH) on 29 February which he was immediately being kept under isolation. On 2 March, the patient was confirmed to be infected with the COVID-19 virus.

The patient’s daughter Ashley Chung shared on Facebook earlier today (4 March) that her father is now gravely ill and appealed to those who have recovered from the virus to come forward and be part of the convalescent plasma therapy.

“Our family is hoping that this plea can help to fast track the plasma therapy for critically sick patients,” Ms Chung asserted in her Facebook post. 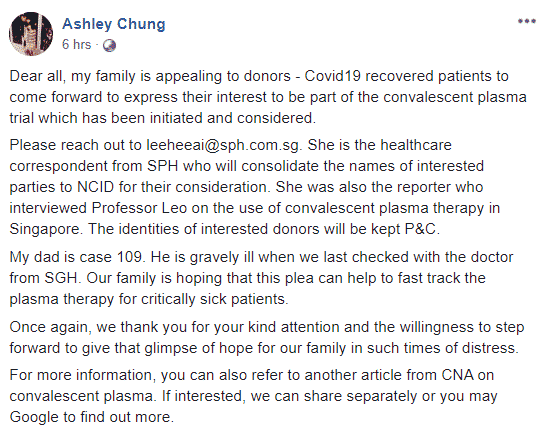 Convalescent plasma therapy involves using infusions of blood plasma from individuals who have recovered from the COVID-19 virus to treat the patients who are battling with the virus.

The World Health Organization (WHO) expert indicated the method was a “very valid” approach to test, but it has to be done at the right timing to maximize the boost to a patient’s immunity, Channel News Asia reported.

“She was also the reporter who interviewed Professor Leo on the use of convalescent plasma therapy in Singapore. The identities of interested donors will be kept P&C,” she noted.

On 21 February, the vice-minister of Science and Technology in China Xu Nanping said that more than 100 individuals who have recovered from the infection have donated blood plasma to treat about 240 patients with severe and critical symptoms, Xinhua Net reported.

Prior to that, he claimed that convalescent plasma therapy has been proved to be effective in severe cases of COVID-19 disease and will also apply the same therapy to patients with rapid onset of COVID-19 virus.