First, Chairman of the Singapore Democratic Party (SDP) Paul Tambyah sought explanation on the government’s decision to raise GST, which is recognised internationally as a regressive tax – from 7% to 9% some time between 2021 and 2025.

Mr Heng cautioned that the tax system should be seen as a whole, taking into account how it pays for the country’s progress and expenditure. Therefore, calling certain taxes as regressive or progressive does no good. Explaining further, Mr Heng said GST is not only borne by Singaporeans but is a tax imposed on everyone, including tourists and expatriates.

Subsequently, People’s Power Party (PPP) Chief Goh Meng Seng questioned the government’s immigration policy that openly welcomes new citizens. Mr Goh asked if citizenship could be given away to people whose allegiances may not be with Singapore.

Mr Heng was quick to dismiss Chief Goh Meng Seng’s claims. He said that there was no reason to doubt loyalty of new citizens as they became citizens by conviction – having chosen Singapore to build a future. Given the data that one in three marriages here is between a Singaporean and a national of another country, many of them are married and settled. Therefore, taking a nativist approach that Singapore is only for Singaporeans will only harm the country. Mr Heng noted that the issue of new citizens could indeed become a divisive force only if people exploit it and “start casting doubts on the loyalty and fitness of new citizens”.

Additionally, Leong Mun Wai, Assistant Secretary General of the Progress Singapore Party (PSP), inquired whether Singapore would consider the issue proportional representation. Mr Leong also asked that by imposing strict criteria on candidates for elected president, would the government be restricting the pool of possible candidates. This, according to Mr Leong, would diminish the institution’s effectiveness as a check-and-balance on the government.

Regarding the issue of proportional representation, Mr Heng remarked that no political system in the world is perfect. However, the most important thing is to ensure that different viewpoints are represented in public discourse.

Whereas on the issue of an elected president, Mr Heng asserted that he did not understand the basis of the question. But as an institution, he noted that the president plays an important role as custodian of Singapore’s reserves. Budgets are not introduced in Parliament until the president is satisfied that it will not draw on past reserves.

On Mothership.sg Facebook post on Tuesday (21 Jan) which features a video of Q&A session between Mr Heng and opposition parties’ members, most of the netizens questioned the GST system adopted by government. They opposed Mr Heng’s response which claims that the GST scheme benefits the lower income group.

Jennie Ong wrote, “How is gst not regressive? It burdens the poor esp. when it taxes on basic necessities like food, transport, utilities, medical etc.” 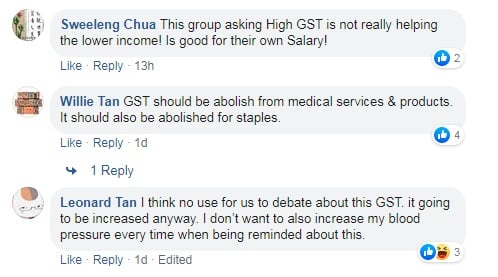 Boey Tuck Wah user highlighted the absurdity behind the government increasing the GST rate to 9% as the people is already overwhelmed with 7% GST rate. He also pointed out that the government assistance schemes do not lessen the burden of poor people.

Meanwhile, other netizens raised their eyebrows on the purpose of raising GST rates, when GST is not considered as the biggest contributor to the government revenue. One person said, “If main revenue is not from GST or corporate tax or income tax…why increase to add burden to our spendings?”

Besides that, a couple of netizens wondered if the revenues from GST will be used to develop a better life for the needy instead of being channeled into the government income.

A few others also pointed out that tourists who visit Singapore will be getting their tax refund before they leave the country; hence, rebutting what Mr Heng’s address on how GST is paid by tourists.

Not forgetting, there were netizens who slammed the Q&A session as it seems like a “coffeeshop talk” with zero outcome to be made at the end. One person even said that this session was equipped with prepared question and answer.

A handful others, however, were comforted by the outcome of the conference, as they applauded the parties’ leaders for clarifying the controversies.