After winning S$150,000 in prize money earlier this week at the Singapore Fintech Festival, leading global financial technology company TransferWise announced today (14 Nov) it will be giving away that money to Singaporean individuals and small businesses hit by hidden bank fees at home and abroad.
The money will be paid to those who can show they have suffered from hidden exchange rate markups by a bank in a cross-border transaction over the past year. Qualifying participants will receive payments via direct bank transfer of the exact amount in hidden fees charged by their bank, capped at S$500 per participant.
Participants qualify on a first-come, first-served basis, until all S$150,000 is allocated, or until the campaign ends on 30 November 2019. Those interested have to provide relevant information via an online form that takes less than 10 minutes to complete.
Participants who qualify will be notified by 31 December 2019 and paid by 31 January 2020. The campaign is open to all individuals living in Singapore, Singapore Citizens living abroad as well as Singapore-registered businesses with fewer than 50 employees.
The move follows news on Monday (11 Nov) that TransferWise was awarded 1st prize in the Global Category of the Fintech Awards at the ongoing Singapore Fintech Festival. The award comes with S$150,000 in prize money. TransferWise won the award for its Borderless Account product – a multicurrency account and debit card available in the US, UK, Europe, Australia, New Zealand and Singapore.
The Borderless Account allows Singaporeans to spend money on their TransferWise card anywhere in the world at a global average price of 0.67% per cross-border transaction – 6x cheaper than the market average of 4% per transaction. It is also the first card that always uses the real exchange rate – the one found on Google.
Banks around the world charge hidden fees of varying magnitudes for cross-border transactions 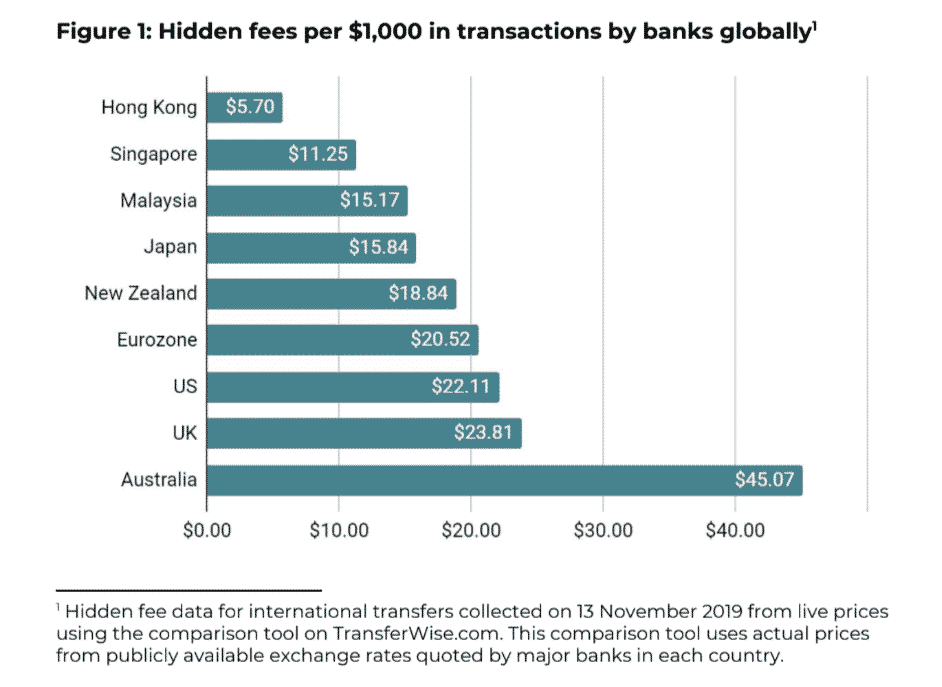 TransferWise was launched in London in 2011 to fight such fees, which are hidden in the exchange rate markup of an international money transfer or card transaction. Instead of only charging what is explicitly stated as a charge or a fee, banks use inflated exchange rates to obscure the actual cost of transactions to customers – taking advantage of the fact that most people lack knowledge about foreign exchange and may not be able to do the calculations needed to make out how much they are actually being charged.
By contrast, TransferWise always uses the midmarket exchange rate – the one found on Google.
“When we buy a cup of coffee or a tray of eggs, the shop tells us exactly how much they are charging us. But when we make a cross-border transaction, banks often hide their fees in the exchange rate. It is a serious problem consumers everywhere in the world face. So we have decided to use our prize money from the Singapore Fintech Festival to do our part to raise awareness about this global problem,” said Mr Kristo Käärmann, Co-Founder and CEO of TransferWise.
“I was impressed by the scale and depth of the Singapore Fintech Festival this year. The Monetary Authority of Singapore has over many years built an important hub here where fintechs can innovate and compete. As a regulator, it has also led the world on issues such as opening up FAST access to nonbanks and allowing MyInfo for instant verification. MAS managing director Ravi Menon recently called on banks to make transparency a key indicator for whether they are treating customers fairly. With banks from all over the world gathered in Singapore this week, it is apt that this campaign is being launched to expose the hidden fees they charge,” he added.