Singaporean millennials are divorcing less, but why?

Photo of wedding cake from Shutterstock.com

Sometimes, millennials get a bad rep in the media for all kinds of things. But, it seems like they have been driving divorce rates lower in Singapore for the past decade. Find out more on what might be causing this trend!

One of the biggest contributors to this change was culture, where individual happiness became more important than “traditional” values. As such, the stigma around the separation of spouses became less commonplace, especially when the marriage is clearly not working out for either party.

Recently, however, another cultural change seems to be driving the divorce rate in Singapore back down: millennials are divorcing a lot less.

Divorce Rates Declining for Younger Couples, but Increasing for Older Ones

After hitting its peak in 2007, the divorce rate in Singapore has been steadily declining. Interestingly, a huge driving force behind this trend was millennials. In contrast to older generations, younger couples have been getting divorced a lot less than they were in 2007. That younger couples are driving this change becomes even more evident when we consider the median age of divorcees and the duration of their marriages. On both accounts, people who are getting divorced have been skewing more heavily towards older couples who have been married for a longer period of time, and not the young newlyweds who are having a sudden change of heart. But why are millennials divorcing less? We delve into a few potential factors below.

Median Age of Divorcees & Duration of Marriages Before Divorce 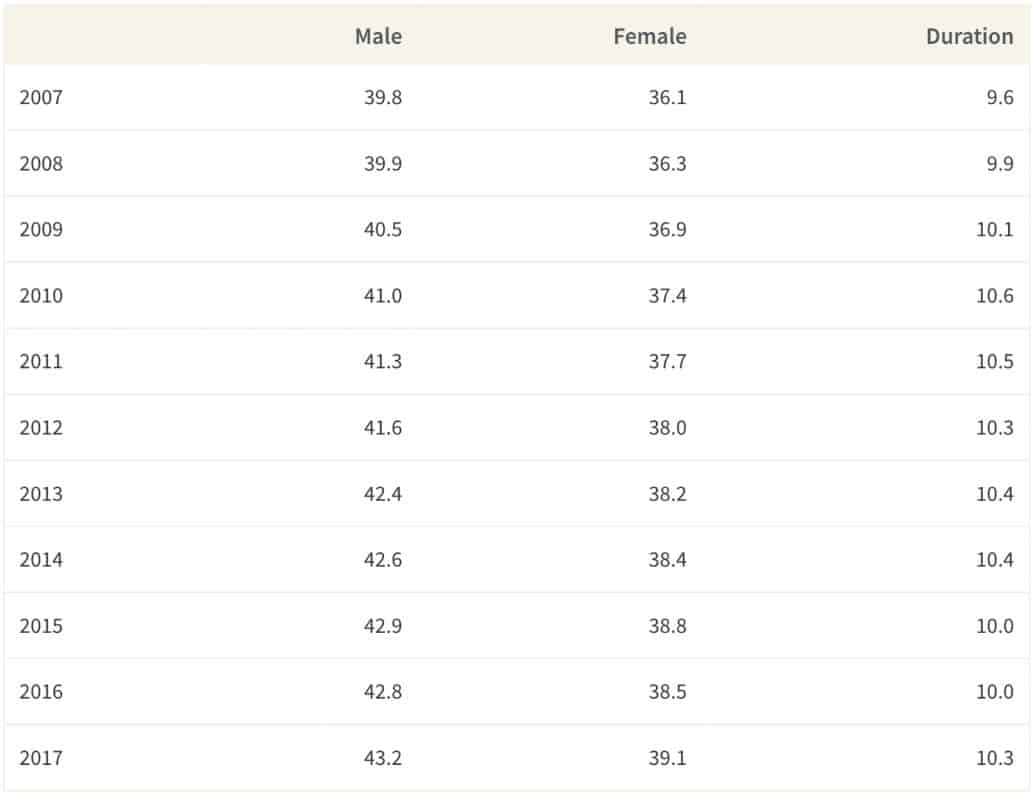 One of the reasons why millennials are divorcing less might be because they are taking more time to get married, as shown in the chart below. In other words, millennials taking more time to get married could be helping them be more cautious and selective in picking their partners (and sometimes even cohabiting before marriage), ultimately leading to more stable unions.

On the flipside, it could also mean that they are able to have more stable marriages because they have more time to prepare themselves for it, financially, emotionally or in any other ways. In some sense, this finding is consistent with other research findings that millennials commit fewer adulteries than older generations. According to the General Social Survey of the Institute for Family Studies, Americans older than 55 turned out to be about 30% more adulterous than American aged between 18 and 55, while the opposite was true before 2005.

More Millennials Are Not Getting Married in General

While it may be that younger Singaporeans are indeed being more selective with their partners, the divorce rate might be declining because more people are choosing to remain single, sometimes for good. For instance, a single rate (proportion of singles among the resident population) in Singapore has increased quite meaningfully in the past decade, especially for those under the age of 35. 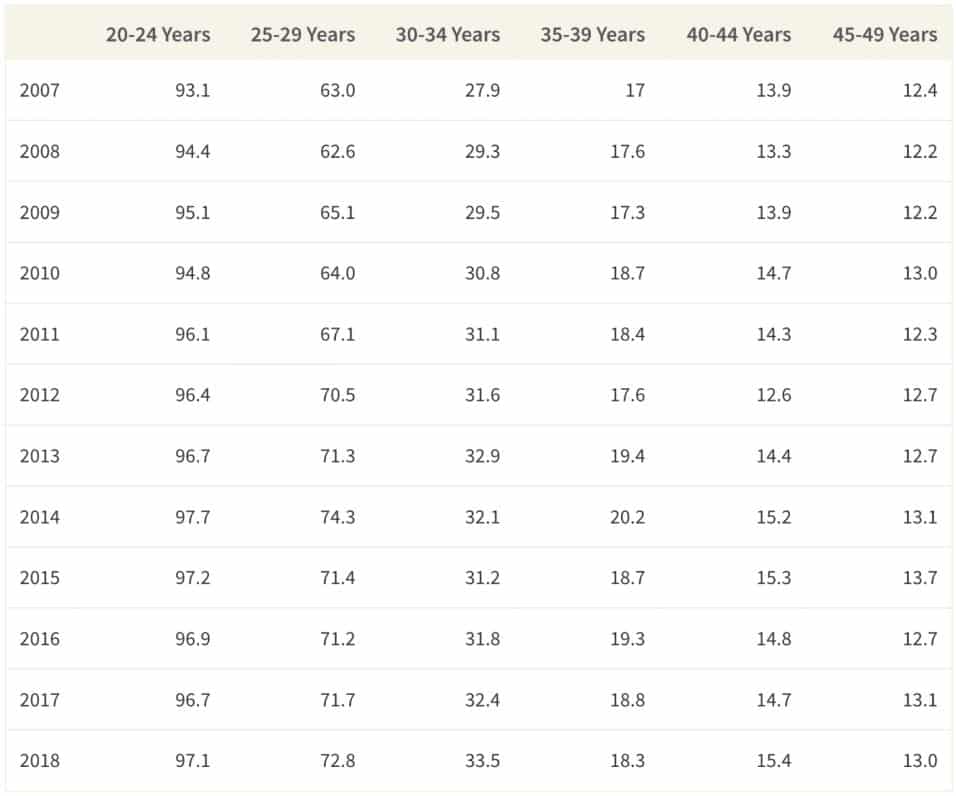 We could read this two ways. First, it could mean that young people are increasingly viewing marriage as an option, something nice to do if one finds a suitable partner, instead of a necessary part of life. On the other hand, it could also mean that people who are less suitable for marriages are taking themselves out of the pool.

Either way, that fewer millennials are getting married seems to be driving divorce rates down by reducing the number of marriages that could have been problematic.

Financial Burdens of Marriage and Being Single

Last on our list of potential reasons why millennials are divorcing less is the rising financial burdens of separation. First, weddings themselves have gotten very expensive, costing about S$40,000 on average.

The rising cost of living and wedding means that millennials may need to wait longer to get married (as we explored above), and economic scale advantages of a married couple may produce additional incentive to stay together. 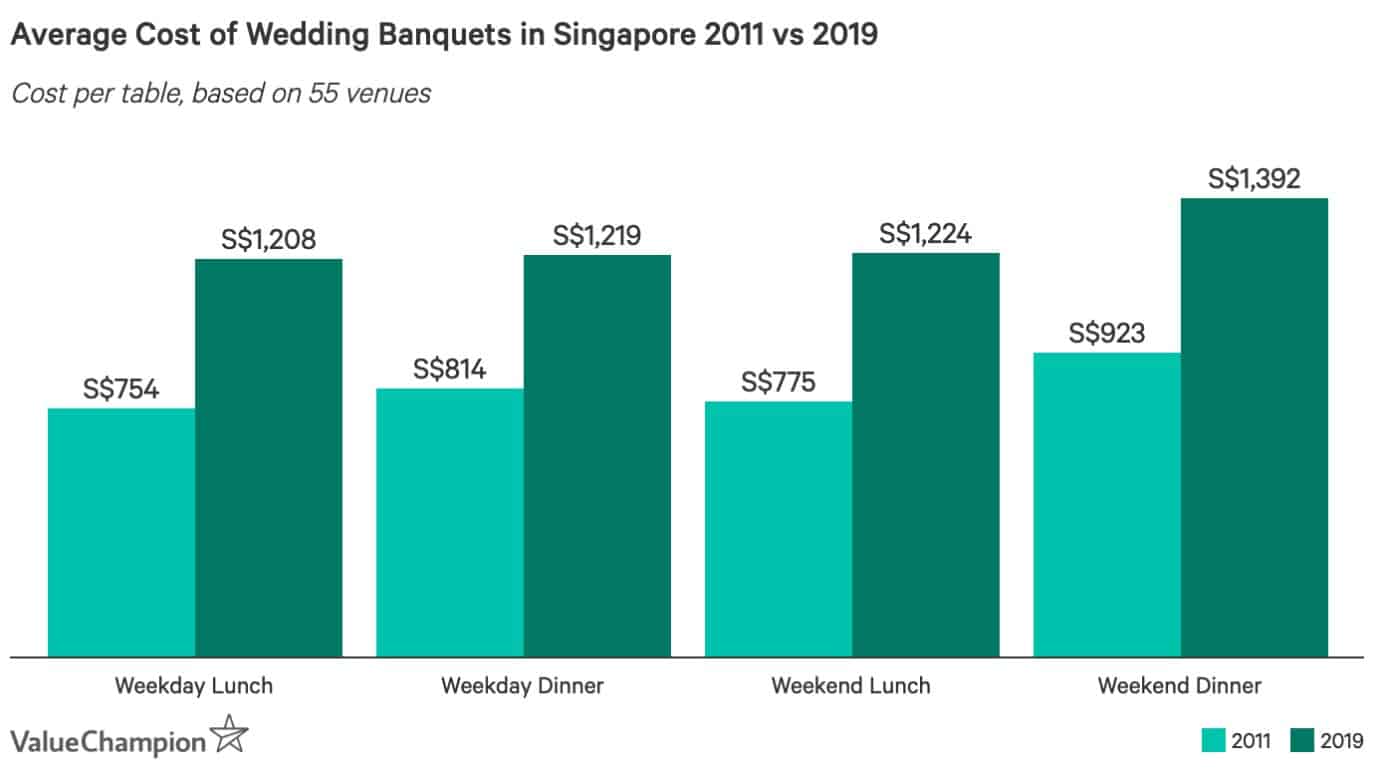 For instance, buying an HDB flat can be much more affordable for a dual-income household. For instance, a couple purchasing a typical 4-room HDB flat at the current average price of S$453,638 would spend S$1,628 on their monthly mortgage payment, which would be half of what they would have paid if they were to purchase two 2-room HDBs separately.

Not only that, couples also have more housing grants to choose from than singles, like Proximity Housing Grant (PHG) that can grant you up to S$20,000 towards your HDB flat.

But, Singaporean Millennials Are Still Divorcing More Than Their Parents

One big caveat of our findings is that millennials are still divorcing more than their parents. For example, the divorce rate of those aged 45 or more, though rising, remain below 10 divorces per 1,000 married residents, at least 40% lower than that of millennials.

Still, that divorce rate for younger couples has declined so dramatically is indeed a positive sign. No matter how bad the marriage had been, resetting your life after separating from your spouse can bring a lot of upheavals in your life.

This was first published at Value Champion’s website, “Singaporean Millennials Are Divorcing Less, But Why?“.