HDB residents may expect having to “pay” as they “throw” in the future, following the National Environment Agency (NEA)’s plans to introduce the tracking of domestic waste for each household via radio frequency identification (RFID) technology in bin chutes in HDB estates.

The Straits Times quoted NEA official Cheang Kok Chung as saying that the NEA is currently “working on a trial to track the number of times a household opens a rubbish chute hatch, with each opening accepting only a fixed volume of waste”.

Speaking at at a presentation during the 2019 Sustainable Innovation Expo in Nairobi last week, Mr Cheang, who is also the director of the NEA’s department for environmental protection policy and international relations, added: “Hopefully (the trial) works and the next time we can report that we are a bit closer to the ‘user-pay principle’ tax.”

Currently, each HDB household pays a S$8.25 domestic waste disposal fee, regardless of how much or how little is thrown away.

NEA’s proposal was partly derived from the household waste practices in South Korea, where households may either purchase designated bags for their domestic waste or take the trash to “centralised RFID food waste and rubbish bins” before having the waste weighed and billed to the household accordingly.

An NEA spokesperson told ST that while the NEA “is constantly exploring ways to incentivise households to reduce the amount of waste disposed of”, the Agency revealed that it currently does not have “plans to introduce pay-as-you-throw RFID waste disposal systems in Singapore”.

The majority of netizens who responded to the ST article have expressed their displeasure against the proposed new “pay as you throw” fee, with several commenters seizing the opportunity to throw in a few puns regarding the issue:

Several commenters cited the monthly Service & Conservancy Charges paid as HDB dwellers as a significant reason to oppose the new household waste disposal charge, given that the expenses for managing the collection of rubbish are already covered by such charges:

Many commenters brought up the issue of bin flooding as a potential consequence of residents’ collective disposal of their trash in the same public area to avoid being charged at a higher rate for their waste, in addition to the strenuous workload that will possibly be shouldered by estate cleaners as a result of the residents’ attempts to dodge the waste disposal charge: 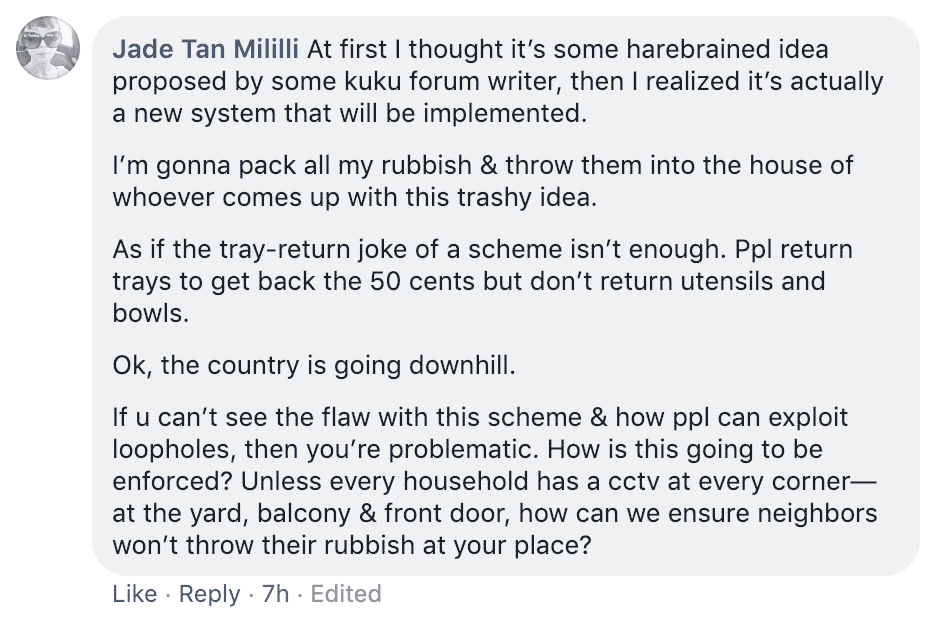 Several commenters brought up the need to cultivate the culture of waste reduction and recycling among Singaporeans, among which include minimising or even eliminating single-use plastic bags and for the Government to implement better recycling systems in the Republic: One commenter highlighted that while the new proposed ‘pay-as-you-throw’ system is good in theory, it might be tricky to implement and maintain:

One commenter is particularly concerned about the burden the new proposed domestic waste charge will impose on low-income families:

Singapore’s political system has to evolve with the times or risk collapse, says Chan Chun Sing