Goh Chok Tong being formally sworn in as the second prime minister of Singapore on 28 November 1990.

However, going through the history of PAP, this may not necessarily be so.

In Goh’s biography, “Tall Order: The Goh Chok Tong Story”, it was revealed:

Goh recalled, “LKY told me he wanted to make Tony the first assistant sec-gen, so I said okay.”

“It has always been my attitude: okay, no problem. The good thing is I never aimed for the top post,” he added.

Hence, as can be seen how PAP works, the PM of the day has a lot of say to decide who would be what inside the party. 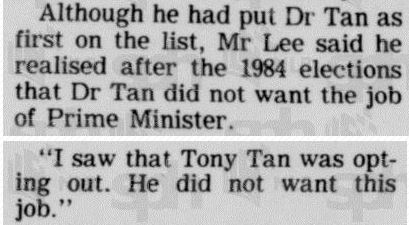 Hence, coming back to Heng, it’s not a done deal that he would become the next PM by virtue of the fact that he is now the 1st Assistant Secretary-General of PAP.

Using PAP history as a reference, Chan, who is the current 2nd Assistant Secretary-General may well become the PM, just like Goh did.