At a public dialogue with South East District residents on 2 August, Emeritus Senior Minister (ESM) Goh Chok Tong told the residents that if the ministerial pays are cut, Singapore will end up recruiting “very, very mediocre people” as officeholders.

“So (when) I look for ministers, anybody who wants to be paid more than half a million, I won’t take him. You are going to end up with very very mediocre people, who can’t even earn a million dollars outside to be our minister. Think about that. Is it good for you, or is it worse for us in the end?” he asked.

In other words, he is only looking for people who can earn more than a million dollars a year in order to qualify for becoming a PAP minister.

ESM Goh was responding to a suggestion by Braddell Heights resident Abdul Aziz, 70, that ministerial salaries be cut to fund pensions for elderly people. Singapore’s entry-level ministers are now paid an annual salary of over S$1.1 million while PM Lee himself fetches a cool S$2.2 million a year.

All first world leaders not qualified to become PAP ministers

Going by ESM Goh’s criteria, then all the first world leaders must be “very very mediocre” since they can’t even earn S$1 million (US$730,000) a year. The following is an MSN report published in Apr this year (23 Apr 2018), highlighting how much some of the political leaders in the first world are paid:

[spacer height=”20px”]All are paid less than US$730,000, with many European leaders even getting less than US$300,000. Only 1 person broke the US$1 million barrier in the MSN rankings and that person is Prime Minister Lee Hsien Loong. He is placed as number one on the MSN list with earnings of US$1,700,000 a year: 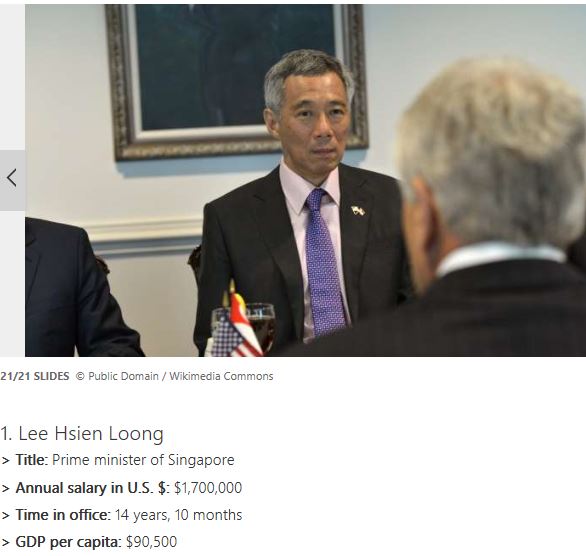 From this MSN report, ESM Goh must have deemed every first world leaders to be “very very mediocre” since all of them earn less than S$1 million. Goh said he would not be “looking for” such people to become PAP ministers. The exception, of course, would be PM Lee who can earn a cool US$1.7 million every year.