The recent red carpet event in Los Angeles for the upcoming movie Crazy Rich Asians was a supposed to be grand debut for Singapore into the world of Hollywood. But it turns out, Singaporeans are all now facing second-hand embarrassment thanks to couple of silly errors on Singapore’s tourism logo.

As you can probably see from the photos, the fancy san serif font used for the word Singapore makes the G look like a C – changing it to ‘Sincapore’ while the letter ‘i’ is missing in the city’s tourism slogan, Passion Made Possible.

Considering the backdrop would have passed under several eyes before arriving at the event in Los Angeles, it’s rather surprising that either no one noticed or someone high enough on the food chain decided it was an error worth ignoring.

Singaporean’s online were obviously aghast at the mistakes:

Though, they also seemed to enjoy poking fun at the whole thing: 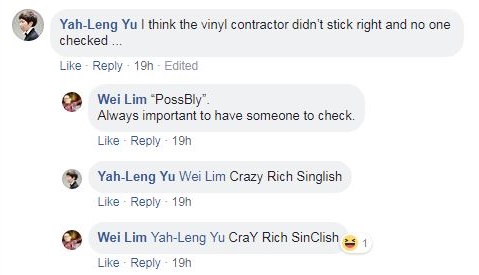 One witty James Teo even suggested that “Sincapore” could just be the Hokkien version of Singapore.

I wonder if any Singaporeans at the premier noticed the error and were momentarily horrified before having to flash their best smiles to the photographers.

Crazy Rich Asians, which premieres in ‘Sincapore’ on 22nd August, is based on a bestselling book by author Kevin Kwan which explores the lifestyles of the rich and famous on the island. The story centres around the romance between an American woman named Rachel, played by Constance Wu, and the Lion City’s most eligible bachelor Nick Young, played by Henry Golding.