by Margaret Yang, CMC Markets
Singapore shares have entered into consolidation phase since mid-May, due to a lack of fresh catalysts and a need for profit taking, after nearly four months of rallying. The Straits Times Index slid to around 3,200 points, down from recent peaks of 3,275.
Breaking below the psychological support level of 3,200 will probably open the floor to the next support at 3,156.
Favourable corporate earnings and better-than-expected economic data have been fully digested by market participants and priced into its current valuation. The average price-to-earnings ratio for the STI is now at 13 times – close to its five-year mean. Weak crude oil prices and a potential slowdown in China’s economic activities also make the future outlook more complicated.

Trading activities were extremely light over the past few days, with the SGX’s average daily turnover hovering around S$600m, far below the average $1.5bn-2bn daily volume observed in the first quarter.
China May PMI beats estimation
The official China PMI readings in May came to 51.2, the same as the previous month’s number, but better than the market’s forecast of 51.0. The official service PMI was 54.5, higher than the previous month’s reading of 54.0.
The data shows that the economy is running steadily, albeit remaining at its lowest level in eight months, beating most economists’ forecasts of a potential slowdown.
This suggest further stablisation of the world’s second largest economy, and will allow policy makers more room to carry out the de-leverage campaign in an attempt to reduce the country’s heightened debts.
Economic Calendar – China official PMI 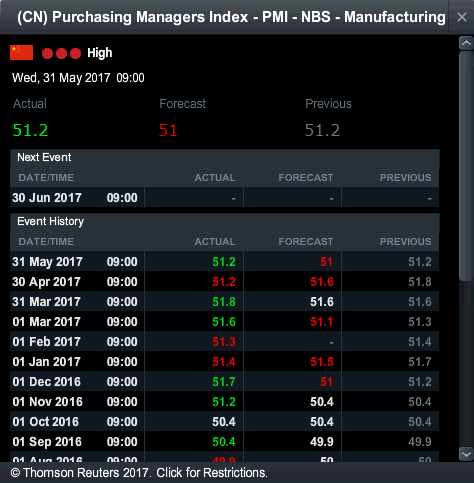