By Margaret Yang, CMC Markets
The euro slid for a fourth consecutive day against the greenback to around the 1.113 area, as market participants started to price in the likelihood of a June rate hike by the Federal Reserve, following better-than-expected US Q1 GDP.
The sustainability of the dollar’s rally will be tested this Friday night, with the non-farm payroll number in focus. A strong jobs report would likely firm up the Fed’s decision to trigger a second rate hike this year, and also reinforce investor confidence in the US economy.
Separately, in the wake of Manchester’s bomb attack, euro and sterling were both hammered due to security concerns and rising doubts around European countries’ efforts in anti-terrorism.
With just nine days left before the UK snap election and Brexit talks under way, the Manchester bomb attack raised further questions over how the British Government would pool security intelligence with the EU allies post-Brexit. Recent polls showed the Conservatives were now holding a narrower lead of only 9 percentage points,
Technically, EUR/USD has broken down the immediate support level of 1.1170; its next support level could be found at the 1.098 area (100% Fibonacci level).
GBP/USD has also broken down its key support level of 1.286 to around the 1.280 area. Its SuperTrend (10,2) has flipped from green to red, indicating the trend has turned bearish. The immediate support level could be found at the 1.267 area.
GBP/USD 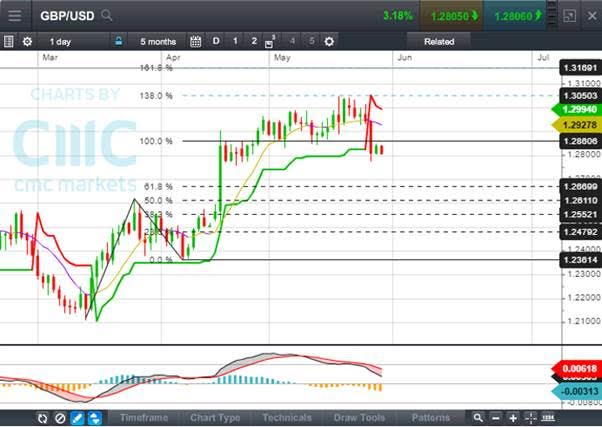