By Margaret Yang, CMC Markets
US equities consolidated for a third consecutive day following the White House announcement of the most radical tax reform plan in decades.
Though this should theoretically have a huge impact on society, the economy and the central bank’s policy, the market responded quite passively, once again proving the old adage of ‘buying on rumors, selling on facts’.
Some highlights of Trump’s tax reform proposals were to significantly reduce corporate tax (from 35% to 15%), to simplify individual tax (from seven to three brackets) and to introduce a ‘one-time repatriate tax’ , a one-time tax on overseas profits to induce companies to move overseas earnings back onshore. Some others are to eliminate estate tax, alternative minimum tax (AMT), and to return the top capital-gains tax rate to 20%.
This ought to great news to the US stock market. The corporate tax cut, if successfully implemented, will dramatically improve US corporations’ profitability and make US companies more valuable.
Individual tax cuts will encourage households to spend more, and corporations will make more money as a result, causing a positive feedback loop of an economic take-off. Inflation will rise at a faster pace, which will force the Federal Reserve to adopt even tighter monetary policy measures.
“One-time” tax on US corporations’ overseas profits, which amount to $2.6 trillion, should induce US companies to repatriate huge amount of overseas profits back to the States, stirring domestic investment such as R&D spending, shares buyback or even dividends payout. All of which should obviously be welcome news to the US stock markets. Asian markets will, however, likely be impacted in a negative way, as capital will flee away from emerging markets back to the US.
Capital gains tax cuts will impact Singapore and Hong Kong as Asia’s financial and wealth management hubs, both of whom are highly dependent on foreign capital inflows, due to their favourable tax schemes. This key advantage will be significantly diminished if Trump brings down domestic capital gain tax.
As regards the central bank’s policy, the futures market suggests the probability of June and July rate hikes have now risen to above 70%. And most market participants still expect another two rate hikes this year, partially due to Trump’s ambitious tax reform and infrastructure spending plan, which will bring up future inflation rates. Consequently, the central bank will have to start tightening at a faster pace to provide a counterbalance to Trump’s fiscal stimulus.
US Dollar Index June 2017 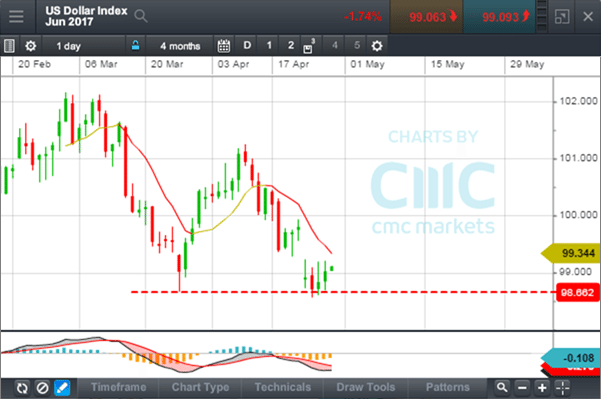