By Margaret Yang, CMC Markets
Global equities cheered on the first round of French election results, which were widely considered to have brought more certainty and stability to the euro and EU single market. EUR/USD spiked over 270 pips in early market trading hours and gradually retraced to the 1.0860 area. The US S&P500 index jumped over 1% and the France 40 index soared over 4% on the bet that Macron will beat Marine Le Pen in the second and final round of the election, two weeks from now.
Although independent centrist Macron took a leading position in the presidential rally – a market-friendly outcome – none of the established parties managed to reach the final round, causing the market to reconsider the dissatisfaction of the people. Rising populism may not have captured the imagination of the mainstream yet, but negative sentiment against immigrants, terrorists, and even globalisation is something that we can’t ignore.
Trump’s first 100 days
Today the eyes of the market will shift their focus from France to the Unites States, with President Donald Trump planning to announce his ambitious tax reform plan tomorrow. During his campaign last year, he promised to cut the corporate tax rate to an eye-watering level of 15%, from the current 35%. He also promised to simplify the tax structure to reduce the burden on tax payers, implementing a ‘border tax’ to make up for the losses.
This Saturday will mark President Trump’s 100th day, after which the market will become less tolerant about what he promises, and more focused on what he delivers. The major setback of his failed healthcare bill has led to a pullback in global equities over the last four weeks. The same story could play out again if he fails to push through his tax reform and infrastructure plan this time round.
France 40 – Cash 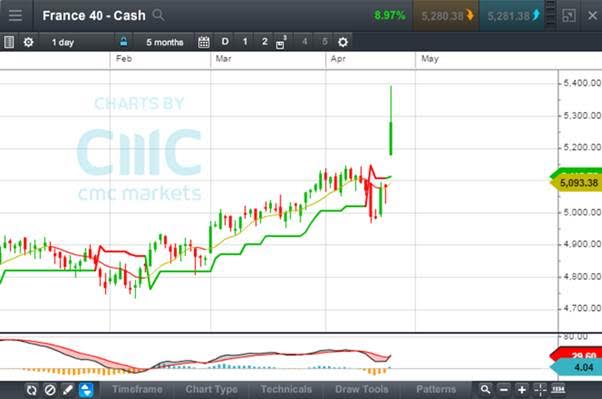