By Margaret Yang, CMC Markets
US equities closed broadly lower on Friday while gold and silver prices advanced to a nearly-two-month high, after Republicans withdrew President Trump’s new healthcare reform plan due to a lack of support.
This shows that the new administration is facing not only external, but also internal resistance to implement their ambitious plans to reform and revitalise the country.
President Trump expressed his disappointment via Twitter, adding “We’re moving on to tax reform”, for which they will seek the support of their Democrat opposition. It remains to be seen whether the market will be easily convinced of their ability to deliver, considering the many other stimulus plans and obstacles on the road ahead.
Technically, the US S&P 500 index has turned bearish, with the ‘SuperTrend’ indicator flipped downwards and turned red for the first time since 8 November. This suggests that the “Trump rally” has probably come to an end, at least temporarily. According to the Fibonacci extension, 2,295 is likely to be a near-term support level, and 2,410 a near-term resistance level.
In Singapore, the Straits Times Index is facing strong selling pressure at around the 3,160 area, which is also its 61.8% Fibonacci retracement level. The headwind from the US is likely to have a negative impact on Asian markets in the days to come, while markets also need some reason to take profit after three months’ of rallying.
US SPX 500 – Cash 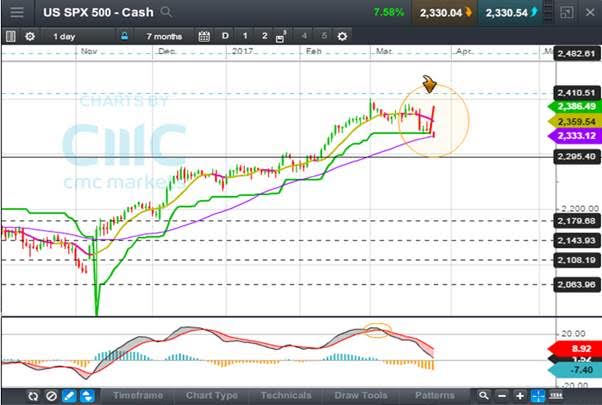