Facebook page of LAMC Productions was filled with complaints from Guns N’ Roses concertgoers after attending the rock band’s sold-out concert on Saturday (25 February) which was held at Changi Exhibition Centre.
LAMC Productions wrote on its Facebook post, “We’re so proud to have brought Singapore’s largest rock show to our shores this evening,” 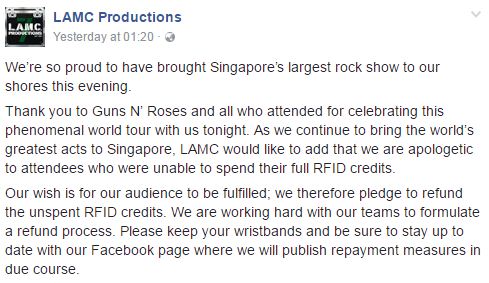 Complaints were mainly about the RFID credits, where audience members bought credits in advance, which were stored in an RFID tag. Some complained that the credit was not reflected despite paying at the ticketing and many stated that they could not use the pre-paid credits after queing for the food and drinks as the organizers ran out of them.
Rick Allen commented that the RFID system is “brilliant in concept but extraordinarily bad in execution”.
The other complaint that the concertgoers had, was on the traffic. Many stated that they missed many songs as they struggled to find parking lots.
Anthony Roshnell wrote that he will be seeking for full refund as he and his wife arrived late due to the bad traffic management. While, Nuno De Canha wrote that it took him two and half hours to get to the venue, no parking with sub standard bus and taxi services.
Andre Poh wrote that he had to wait for more than an hour, waiting for buses.
Zerlina Lim said that she had to wait for more than 1.5 hours to get out of the parking lot.

Commenters on the Facebook post also filed their complaints about the lack of first aid for an event of such a turn out. Many also wrote that there were no security checks upon arrival, adding that no one even checked for the tickets. Highlighting the possibility that people who did not purchase the tickets could very well well get inside the venue, a concert that some pay hundreds to attend.
By the time this article is being published, there have been more than 550 comments on its Facebook post stating how the concert was poorly organised. The production company have since apologised for the inconvenience experienced by its customers and offer refunds for their unspent RFID credits.
Read here for an exclusive interview by Bandwagon with LAMC Productions co-owner Ross Knudson on the problems encountered by the production company and what has he got to say about the complaints.
Here are top five comments from the concertgoers on LAMC Production Facebook post:

The G7: big powers’ gathering returns to the spotlight