By Margaret Yang, CMC Markets
The peaceful transition of the US presidency, despite several strikes last Friday evening set the tone for Asian’s opening this morning. The dollar slid for a third day to the 100.50 area, whereas gold and the Japanese yen climbed higher. The Nikkei 225 opened almost 1% lower. The next three months will be a stress test for emerging markets, as US policy may gradually shift towards a more domestic-oriented, protectionist stance.
This a key message that Trump has sent to the market last Friday – “America First”.
Several of Trump’s controversial proposals including trades, tax cuts and financial deregulation will be carefully watched in his first 100 days in the White House. That said, the next three months will be a test of whether the president and his team have the political power to deliver dramatic change in public policy.
Another controversial issue is his foreign policy, especially towards China and Mexico. Previously Trump blamed these emerging economies on “stealing” manufacturing jobs, and accused China of being a “currency manipulator”. How he can strike the right balance between reviving US manufacturing without triggering a detrimental “trade war” between these countries will be critical.
Change will come faster than expected.
Foxconn, the world’s largest electronics contract manufacturer, is planning to set up a display-making plant in the US with an investment amount over $7 billion. This is following Jack Ma’s meeting with Trump last week, in which he promised to bring over 1 million small business jobs to the US over the next decade.
Japan 225 – Cash 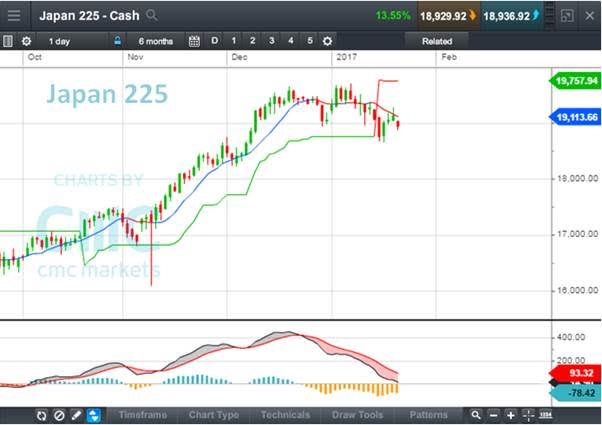