“The major source of inequality in many developed economics is the inequality between firms, The wage differences between firms account for the bulk of inequality. So convergence between companies in the adoption of technologies and in the quality of the jobs, is also a way if addressing social inequality”

He is not wrong but he is obfuscating the major underlying effects on social inequality.

The inequality he talks about here is that measured by what is called the Market Gini Co-efficient. This measures only income and without doubt disparity between wages in small and large firms contribute but the much bigger contributors are wages between different kind of jobs e.g. that of a labourer and an engineer.

This is evidenced by the fact that in all technologically advanced countries including egalitarian Scandinavia, social inequality based on income alone or Market Gini is high, in the mid 40s for Sweden and low 50s for Denmark. The only major exception is Japan (mid 30s).

But income is not the sole determinant of overall social inequality. This is measured by what is known as the Net Income Gini Coefficient which takes into consideration not only income but also tax and social transfers, the latter meaning benefits in cash and in kind. This is the Gini that is used as a benchmark where we arrive at the net effect of social inequality. In this the Scandinavians achieved the low social inequality for which they are famous, with most of the other European countries such as France and Germany equal or close to them. So Sweden and Denmark fell from mid 40s and low 50s to mid 20s.

The big difference made to social inequality is therefore due to taxes and social transfers. This is the main driver in addressing social inequality – the convergence between firms in the adoption of technologies as a way of addressing inequality as asserted by Mr Tharman helps but nowhere as much government tax and spend policies. 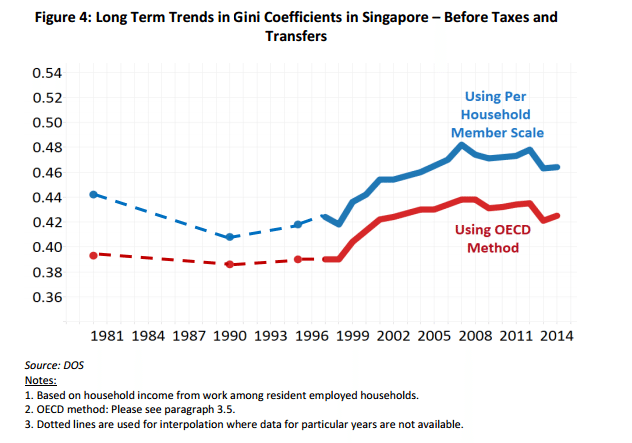 This explains the high inequality in Singapore, measured both by the Market Gini (mid 40s) and Net Income Gini (40). The cause is clearly the low taxes on the high income earners and the low level of social transfer. Here is another thing – technological advancement and strong GDP growth by themselves cannot lower inequality, in fact they raise it.

Bear that mind when the government keeps pounding on about GDP growth.