The Traffic Police (TP) conducted an island-wide enforcement operation during the early hours of Thursday, 20 October 2016, which was targeted at errant motorists who were found to be drink-driving.

According to TP, 77 drivers were stopped and tested for alcohol consumption at various road blocks set up across Singapore.

In addition, first-time offenders can be fined between $1,000 and $5,000 and can have their driving licences disqualified for a period ranging from 12 to 48 months, depending on their BEA test results. Repeat offenders may be punished with a maximum fine of $30,000 and a mandatory jail term of up to three years. They may also receive up to 6 strokes of the cane should death or serious injury be caused.

Head Operations and Training Branch of Traffic Police, Superintendent Ho Yenn Dar, said, “Drink-driving is a serious offence. It poses a danger not only to the driver but to other road users too. Although the number of drink-driving related accidents has decreased in the first 6 months of this year, the Police will continue to clamp down on such irresponsible road behaviour. Don’t drink and drive. Be home safely for your loved ones.” 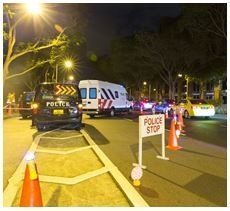 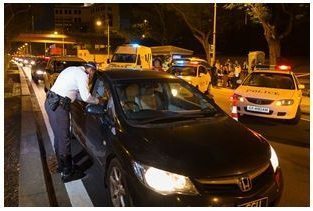