Friday’s US non-farm payroll number came at 156k, below the consensus forecast of 175k. This however did not substantially change the outlook of the market’s expectation of a rate hike by the end of this year.

According to Bloomberg World Interest Rate forecast, the implied probability of a 25 bps Dec rate hike remains at 60%, unchanged from the previous week.

The US Dollar Index retraced 0.7% from last week’s high to 96.5 this morning. The greenback traded lower against major peers following the disappointing jobs date last Friday.

USD/JPY fell to 103.00 area after forming a “double top” pattern last week, indicating a near term resistance level at 104.00.

Noble Group managed to sell its US Energy unit at $ 1bn

The Noble Group agreed to sell its US energy unit to Calpine Corp for US$ 800 million plus working capital, estimated at an additional $248 million to Calpine Corp, according to the news reported this morning.

This deal marked an important step in completing the company’s $2 billion capital-raising initiative. This largely alleviated the concerns of a liquidity squeeze that the company has faced during commodities slump, and may aid in Noble Group’s turnaround.

It has also helped to explain the tremendous rally of Noble’s share price, which has surged more than 26% over last week alone. The share price rally was accompanied by spiking volume, signaling that theretail and institutional investors are back in the market.

Similarly, major shareholders have been boosting their stakes in the third quarter as well. 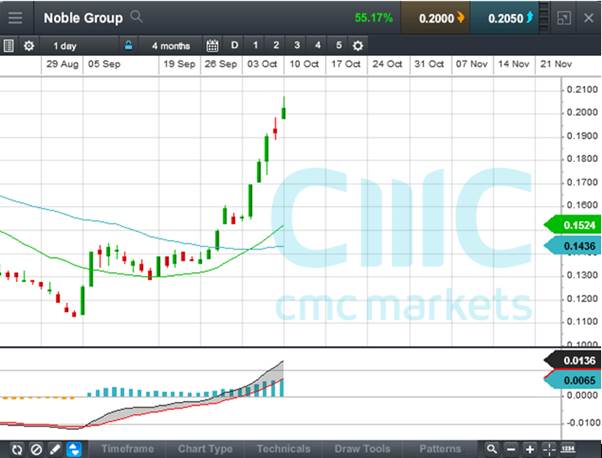