Will the debate send volatilities higher?

Despite the Fed’s decision to hold interest rates in its recent September meeting, divergent opinions have emerged between the Fed’s members. Equity markets have since closed lower on Friday. US indices lost around 0.6%, ending a two-session gain. European markets have also retraced, with Financials (-1.18%) and Energy (-1.02%) been the worst performing sectors.

With volatility near to year-to-date low, the spotlight has now shifted from the central banks’ policies to the upcoming US presidential debates between Clinton and Trump on Monday evening (Tuesday morning Singapore time). Investors will be watching closely on the shift of momentum in the race, which could once again trigger a new wave of market volatility.

According to the latest poll, the chance of Donald Trump to win the presidential election has risen to 44%, just a margin below that of Clinton, whose winning probability stands at 46%. If Trump leads in the first presidential debate, we will probably see higher risk premium in the equity market and rising political uncertainties in the United States. As a result, safe-haven assets such as gold, silver and yen will probably enjoy a period of rally.

In the near term, $43.60 remains a key support level for WTI oil price. Since markets have relatively low expectations on a possible freeze agreement in this meeting, any positive news coming out this Wednesday will lead to a quick rebound in oil prices. 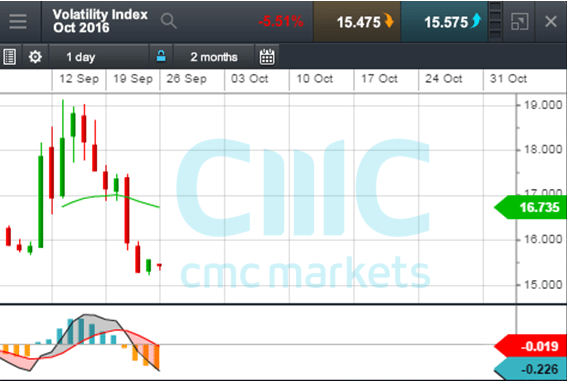