At least 247 killed during 6.2 magnitude earthquake in Italy

ROME — A 6.2 magnitude earthquake hit the centre of Italy in the early hours of Wednesday (24 August) morning at 3:30 AM (9:30 AM Singapore), collapsing buildings, roads and other structures in a wide area of medieval towns in central Italy.

The last reports from Italy’s civil protection agency said the quake killed at least 247 people and injuring hundreds of others, while an unknown number were missing or feared dead, trapped under the ruins of collapsed buildings.

In the midst of death scenes, dozens of emergency services staff and volunteers vowed to attempt to pick more survivors from the wreckages; rescuers pledged to work through the night in the hope of finding people alive in the ruins.

According to the radio police near the town of Ascoli they could hear cries for help from under the rubble but lacked the heavy equipment to move the rocks.

CNN reported, in one such rescue, shown on CNN affiliate Sky TG24, a firefighter in Amatrice clawed at the rubble, trying to get to a little girl.

He pulled back bricks and other debris as his co-workers and other men leant in.

Suddenly there was a foot, and leg, then the other leg.

In the video, a man seems to be talking to the girl, as someone repeatedly says the name “Julia.”

Several people wriggle in to help the firefighter.

The firefighter clutches a girl, said to be eight years old, and walks her out of the huge pile of rubble as a volley of cheers

The girl silently holds on. It is impossible to tell what colour clothes she is wearing because she is coated in grey dust.

“Bella ragazza!” one bystander says as the girl is carried to safety. “Beautiful girl!”

The earthquake struck so suddenly, and the first shock was felt across central Italy from Rome and Naples to Puglia at the end of the peninsula, but the hardest hit were in the hilltop towns near the epicentre — Pescara del Tronto, Amatrice further west, and Accumoli near Rieti. 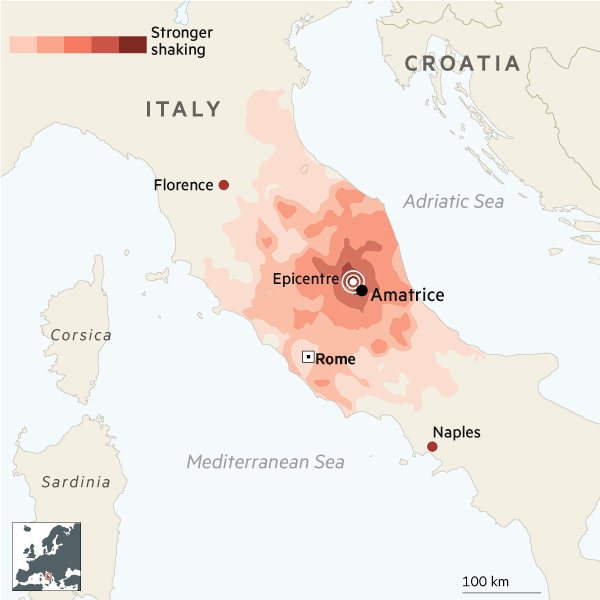 Historic city centres featuring centuries-old houses, churches and shops which didn’t have a seismic-resistant structure easily crumbled under the impact of the first quake and dozens of aftershocks.

Fabrizio Curcio, director of Italy’s civil protection agency, activated national emergency procedures. He said the quake was on par with one in L’Aquilla in 2009 that left more than 300 people dead.

USA Today reported, Mayor Sergio Pirozzi of Amatrice told the AP that rescue teams were trying to reach all 69 villages around his town. “The town doesn’t exist anymore, people are stuck underneath the rubble; houses are no longer there.”

The local hospital was damaged badly that the wounded and stretcher-bearers had to gather in front of the building and waited for ambulances to transfer patients to other towns.

ANSA reported, in Accumoli, Mayor Stefano Petrucci said at least 2,500 people were displaced, including 2,000 summer season tourists. “We will try to assist them all, but they’d better leave the country,” he said.
In Pescara and Arquata del Tronto, two tent areas were being erected to accommodate the victims.

Homeless families are being sheltered in public buildings and civil defence groups collected camp stoves and generators for their usage.

At least 247 killed during 6.2 magnitude earthquake in Italy