Ji Bin Bin, a woman from Beijing, has become a mini-celebrity for posting an epic 3-minute rant about Chinese tourists misbehaving and about a mother ‘mis-educating’ her son.

Her video has been viewed more than 400,000 times and by the time this post has been published, she already has more than 5,500 followers on her Facebook profile.  Ms Ji has also just created a fanpage which followers can choose to support her at.

The viral video shows Ms Ji at a beach in Thailand, where she is supposedly travelling with other tourists from a Shanghai tour group.

She began her rant with a lady who insisted on bringing a piece of wood from the beach home.

“Just now here at the Lover’s Beach (Phuket), there was a tourist from Shanghai Jiangsu who wanted to take this piece of wood home”.

“All of the tour guides told her that you can’t take anything from Lover’s Beach, not one blade of grass, not a rock, not one grain of sand”.

She began to cause a commotion with the guides, “I’ve been to over 20 countries around the world” she said.

“I’ve been able to bring everything I wanted home.”

“As long as it’s allowed by customs, I’ll take it home.”

No matter how they explained to her, she wouldn’t listen.

“I told the insisting lady, you go ahead, take it home, and told Thai guides, let her take it home.”

“And if she doesn’t take it home, we shall insist that she do so”

“And at the airport make sure you tell the Thai customs.”

“At once this lady immediately shuts up. She was so damn arrogant”

“This woman is from Jiangsu who joined a Shanghai tour group”.

Mrs. Ji continued, “If you’re that awesome and have been to 20 countries, which of these countries did you actually spend your own dime to travel?”

“Was it not the party and the people that paid your expenses?”

“You’re spending our money and have the cheek to be this arrogant”.

“You’re so awesome no one on this planet is more awesome than you.”

“We keep telling you about the rules and regulations, the law, the law and you just won’t listen. You say back in China we can do this.”

“If not for this rules, our Chinese tourists would have emptied this beach in under a year.”

And then, in the video, Mrs. Ji right away changed the topic.

“ Yesterday at the bay by the harbour there was this little kid just six or seven, who just took the drinks we’re given without even saying a word.”

“I directly told the kid, that those aren’t his drink, this is for our group.”

“Guess what his mom said?!”

“I’ll trade mine with yours, no big deal.”

“This is exactly the sort of moral blackmail we keep hearing about! What do you mean you’ll just get it exchanged for me?!”

“Is that how you educate your kid?”

“What’s going to happen when your kid grows up and enters society?”

“Is he going to just grab everything in sight?”

“If he decides to work for the government, what happens when he’s going to be a civil servant? Is he going to take everything that he sees?”

“What do we want such a person for?”

“What do you mean you’ll get the drink exchanged for me? I’ll just throw your kid into the sea!”

Netizens seem to like her rant, and went on to praise her video. 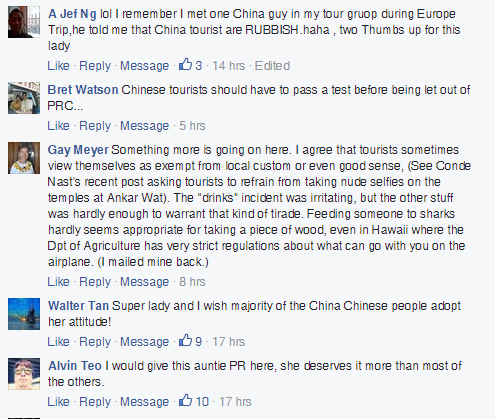