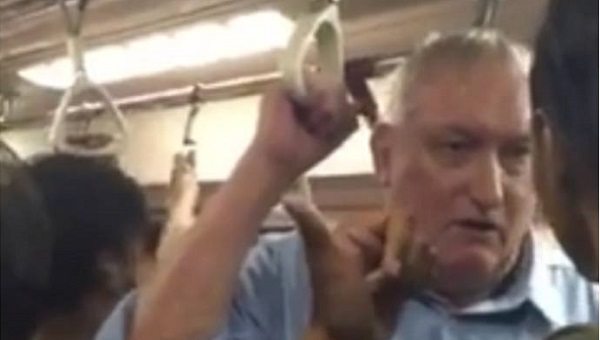 An incident took place in the MRT train recently as shown in the video below.

Apparently, a Caucasian commuter was unhappy with a t-shirt a young man was wearing and started scolding and taunting the young man.

While he was doing so, the young man did not react and kept looking straight ahead, ignoring the Caucasian man.

At one point, the older Caucasian man shouted at the young man, “Do you want to fight?”

The rest of the commuters in the train too were minding their own business.

When the train pulled into Ang Mo Kio station, the Caucasian man said to the young man,

Finally, what looked like a Malay man stepped forward and questioned the Caucasian man’s abusive attitude towards the young man.

The two got into a bit of a quarrel before both parties were called off the train by police.

The video was posted online by Nabilah Nasser on her Facebook page. See here.

She also explained what happened: