Did People’s Association reserve Aussie BBQ tickets for its own members only?

“The idea was good but shame it ended up as an ugly spat between the haves and the haves-not,” said one person.

He was referring to the much anticipated SG50 barbeque (BBQ) organised by the Australian High Commission here in Singapore.

The island-wide event by the Australians, to celebrate the two countries’ bilateral ties and to show solidarity in celebration of S’pore’s 50th year as an independent state, would see the bbq take place at 50 locations in Singapore.

The event also coincided with the visit of Australian Prime Minister, Tony Abbot.

All seemed to go well, with many looking forward to being among those who would get to taste the 10,000 steaks which would be dished out on Sunday, 28 June.

PM Abbot and his Singapore counterpart, Lee Hsien Loong, themselves were at the BBQ in Bishan Park on Sunday.

It was, as believed, a free non-ticketed event.

However, on the day of the event itself, the Australia in Singapore Facebook page dropped a bombshell – tickets would be required to participate in the feast.

“Many locations are ticketed by the People’s Association to ensure there’s enough food for all. But we’ve been told some spare coupons are set aside for those who just show up. We can’t wait to cook for you.”

Questions soon started to be raised about the ticket requirement.

Candy Foowitu posted: “Turned up early only to be disappointed later on when they started distributing the food when our group were asked to produce tickets? Why wasn’t this announced earlier that those ticketless residents from neighbouring estates were only entitled to leftovers from 8.30pm onwards? Disappointing.”

Some who attended the event on Sunday confirmed that tickets were required.

Davis Yin: “Seriously, the Aussie BBQ event was poorly organised!! I was looking forward to enjoy my Aussie BBQ dinner with a friend. But in the end, an event staff told me that a ticket is required to claim the food. The website stated that the Aussie BBQ event is opened to the public. Well, I was rejected and turned away because I didn’t have a ticket to claim my food.

“Frankly, you all wasted my time by going down to Bishan Park. I demand an explanation!!!”

“All are just inaccurate information passed down,” Junn Chin Teo said. “I was rejected right in the face at Bishan Park. Seriously waste my bloody time. You’re welcome.”

Soon, the anger was directed at the People’s Association, as criticisms and questions started to flow in on the Australia in Singapore page.

Some asked if the People’s Association had reserved the tickets for their own members, such as grassroots members, with none issued to the public.

Some complained that there were no public announcements of where to collect the tickets.

Aileen Lee: “It’s 28 June 6:35pm, we dropped by Bukit Batok East Community and were surprised that ticket was required to attend. We were told by volunteers.. tixs were free but all given away by Tuesday! My kids are very disappointed.”

Richard Toh: “Same same ticket only thing at Bishan Pk at 7.30pm. Asked 3 separate Teck Gee T shirt wearing “officials” and they said no tickets available as they are given to “Grassroots members only”.”

“PA, you should clearly state its for your selected members AND NOT OPEN TO PUBLIC,” he said.

Tan Wan Qi: “Don’t understand why the sudden PA intervention, turning such awesome event as if their own event. We went down at 7.30pm with our family as well to Bishan Park, only to be turned away by the grassroots members. Feels terrible.”

Jonathan Goh: “Isnt this a walk in event? Why must it be ticketed, the CC near me didnt even publicise anything about this event.”

Dudu Kenny Xie: “I when over to punggol hardcourt. And those PA members rejected us to be participate. I even asked the lady in charge. Basically just brushed off us and she continue entertaining their dearest MP Ms Penny Low.” 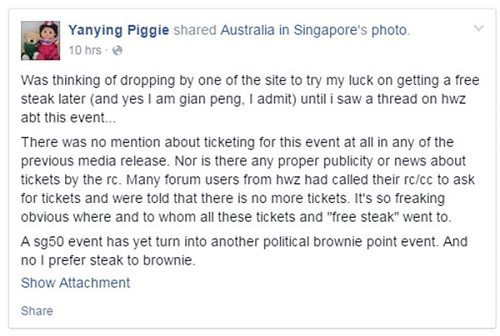 The incident is also being discussed at the Hardware Zone forum.

The Online Citizen (TOC) has emailed the People’s Association for clarification on the allegations that it had reserved the tickets for its own members.