Pasir Ris ONE DBSS – yet another development under fire 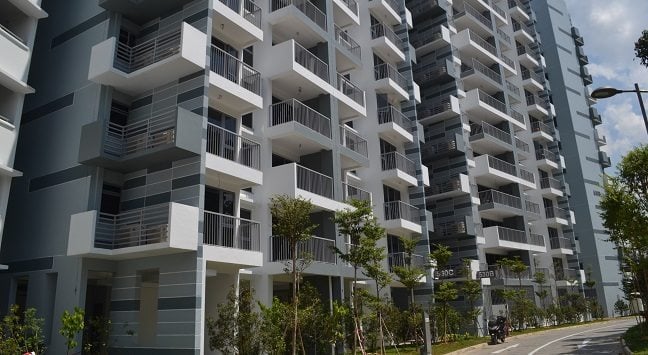 In what is becoming a recurring series of incidents, another group of homeowners of new flats are crying foul at the shoddy workmanship and design of their homes.

The Online Citizen (TOC) understands that some of the owners of the new Pasir Ris ONE have just received their keys to their new homes which are located at the junction of Pasir Ris Central and Pasir Ris Drive 1, a stone’s throw away from the Pasir Ris MRT station.

The 447-unit development is one under the Design, Build and Sell Scheme (DBSS), and consists of three-, four- and five-room flats. DBSS flats are supposed to come with better finishings and design, as buyers pay a premium for them.

However, since owners had entry to their homes the last few months, it has emerged that the workmanship has left a lot to be desired.

For a start, the corridors of the flats are so narrow that two persons can hardly walk side by side.

When TOC measured the corridor of one block, it was precisely 1.2m wide. 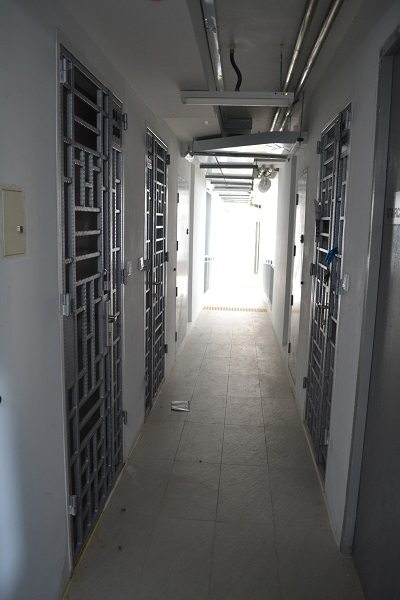 This is believed to be the minimum required by HDB and the Singapore Civil Defence Force (SCDF) safety rules.

According to the Singapore Civil Defence Force (SCDF) website: It is also worth noting that in a parliamentary reply in 2013 to a question of ensuring “clear passages along common corridors of HDB flats”, the Ministry of National Development said it was revising the clearance required from 1.2m to 1.5m, to provide for safety and rescue purposes.

“To prepare for an ageing population and to provide wider access routes for people using mobility aids, BCA announced revisions to the Code on Accessibility last month.

“The revisions include a wider minimum clearance width of 1.5m along corridors for buildings with plans submitted for regulatory approval on or after 1 Apr 2014.”

Some of the gates at the main doors of opposite flats along the corridors are so close together that the gates almost touch each other when they are swung open.

It is thus unclear how the homeowners of the Pasir Ris ONE flats would have the requisite allowable and safety space in their corridors if they were to, for example, place a shoe rack or a bicycle outside their main doors.

Another curious placement issue is the way the gas vents have been installed on the ceilings along the corridors. 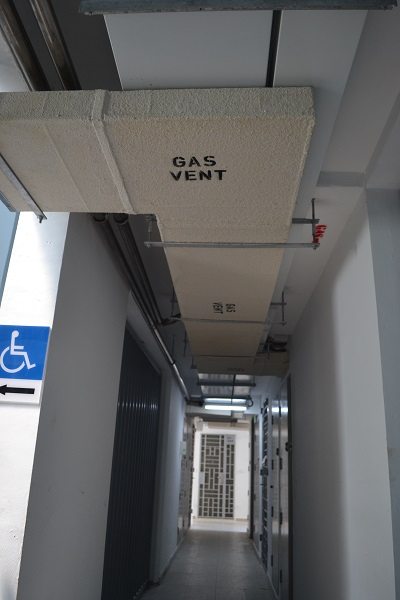 Besides its questionable aesthetic design, is there also a safety issue here if an incident of leakage or fire should happen, especially with the narrow corridors?

Besides safety, there are also concerns of security with how the flats are designed.

Burglars or others with ill intention could gain easy entry into their homes through the air-conditioner ledges, for example, and enter the flats though the windows.

Here is how it looks like, outside a ground floor flat: 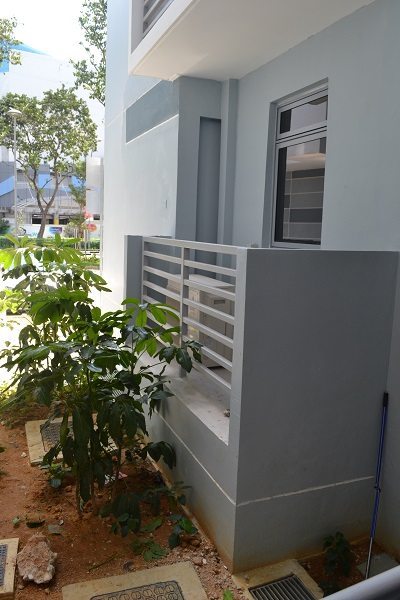 Here is another view: It would not be too hard for someone to climb to the upper floors through these balconies.

And for some unknown reasons, TOC understands that the owners cannot make use of the entire ledge, although the floor area of the ledge is included as part of the size of the flat.

And even over at the community barbeque pits, the design also came under fire, as one resident posted on the Pasir Ris ONE Facebook page on 4 June:

TOC measured the height of the pit and it was about 1.3m high – from the ground to where the wire mesh would be. This would make it hard for anyone who is below, say, 1.7m to manage the barbeque.

When it comes to drying the laundry, the clothes rack isn’t something to crow about either.

The rack is so small it can hardly dry any clothes; and also, the sun is blocked by the ledge above the rack which is presumably to prevent litter from the upper floors from reaching the lower ones.

These would make drying your laundry quite a challenge. 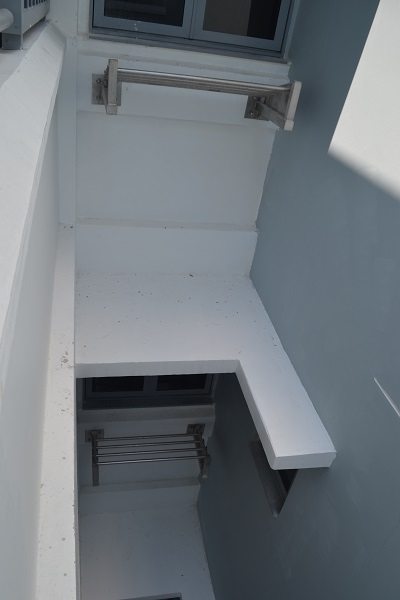 These are some issues which residents have with the external surroundings of the flats.

What about the insides?

TOC understands that owners face many defects which need to be rectified.

These include tiles in the living room which were either scratched, or have different shades of colour, or the groutings were poorly finished, while others have uneven flooring which need to be corrected.

Some of the grilles at the balcony were also badly painted, and others had leaky pipes in the kitchen.

The placement of the water heater in their kitchens is also another issue.

When it is turned on, the heater can become a safety hazard, and it also contributes to warming up the kitchen when cooking is also in process because of the inefficient ventilation design.

In the bedrooms, there were more defects – there were windows which took some effort to open, and toilet and shower doors were designed such that one has to close one in order to have enough space to open the other.

And then there were the cracked tiles and poor grouting work.

Some have complained that the master room, which is 15sqm, is so small it can barely fit a king-sized bed, leaving scarce room to walk.

According to HDB rules, homeowners have one year to inform the developer of any defects.

Pasir Ris ONE is a joint project between Sing Haiyi Group and Kay Lim Holdings.

Homeowners have since created a private Facebook group  to highlight the flaws in their homes.

Such problems in new developments have been reported  by new owners of other DBSS flats at the Trivelis in Clementi and Centrale 8 in Tampines in the last two months, along with several other groups of owners of build-to-order flats, such as in Punggol and Bukit Panjang, in the last few years.

In its response to all these, the HDB said earlier in June that the defects were merely “surface imperfections.”

“This is due mainly to the inherent features of natural materials or the nature of construction works that are dependent on manual labour,” a HDB spokesman said.