If you are the secretary general (sec-gen) of the National Solidarity Party (NSP), chances are that you won’t last very long in the position.

The latest casualty of what some say is the result of internal political bickering is its sec-gen, 53-year old lawyer, Tan Lam Siong.

The NSP announced on Wednesday, 17 June, that Mr Tan has resigned as its sec-gen.

He had only been in the job for less than five months.

The NSP statement, posted on its Facebook page, said Mr Tan is stepping down so as to “focus more on his passion for social and community work, and charitable pursuits while remaining as a congress member.” 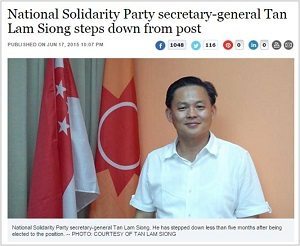 When he was elected into the NSP as its sec-gen in January, Mr Tan reportedly told the Chinese press that he “was surprised to be elected”.

However, he added: “Since I have taken up this heavy responsibility, I will give it my all.”

This seems to have lasted less than half a year – which, in the wider context of the shelf lives of the other sec-gens, has raised questions of NSP’s internal structure and politics.

In the last five years, besides the exodus of ordinary members, which include Ms Nicole Seah, the party has seen a turnover of several sec-gens.

All of them had had stints of less than two years each:

When each sec-gen stepped down, diplomatic reasons were given by the sec-gens themselves and the party. 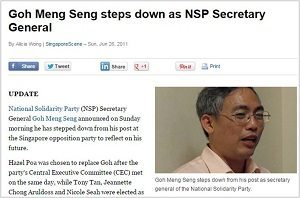 For example, when Mr Goh resigned from his position after the 2011 general election, where he led the party’s campaign with NSP fielding the most number of candidates among all the opposition parties, he said it was “to reflect on his future”.

Mr Goh said he would be on a sabbatical for at least two years, and noted that it is “timely to take stock of my future directions”, Yahoo Singapore reported then.

And Ms Chong-Aruldoss, who stepped down after losing a bid for the president’s post in an internal election earlier this year, told the press that “she and the others harboured no acrimony towards the NSP.” 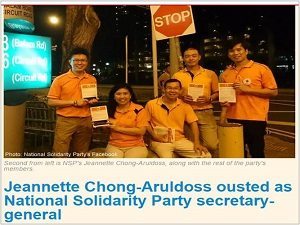 As for Mr Tan, he has kept silent so far on the reasons for his resignation as sec-gen.

[UPDATE: Mr Tan has since written on his blog: “If there is a single reason why I choose to finally step down after putting in so much time, energy and resources in such a relatively short time, I can only say it is due to incompatibility issues.“]

So, what really is the reason for such a high turnover of leaders in such a short span of time?

One reason, as mentioned above, is the internal politicking, especially when new members join it.

This was what Mr Goh felt when he stepped down at the helm.

Speaking to The Online Citizen (TOC), he said he had “predicted NSP may not be sustainable due to too much internal politicking and partly due to the fact that the new comers who are ambitious to take over the party.” 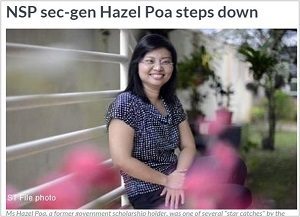 While he said there was “nothing .. wrong being ambitious in politics”, he explained that integration must be done “properly” as this was “the key to successful leadership.”

“Everyone is a volunteer [in] the party and a leader of a political party cannot hire or fire [as he wishes],” Mr Goh said. “Therefore integration to the party and understanding of each member is important.”

A recent incident involving the status of the party newspaper might be indicative of disagreements in leadership style behind the NSP doors. (See here.)

Another reason for the frequent changes of sec-gens could be the role of the president of the party, which is currently being held by 67-year old, Mr Sebastian Teo. He has been a stalwart of the party and has been president for some 6 terms, or 12 years. (The party holds its central executive council election every two years.)

According to the NSP constitution, one of the powers of the president is the casting vote afforded to him.

A casting vote is an extra vote given to someone to decide an issue when the votes on each side are equal.

In other words, he has veto powers.

“The public would assume that the sec-gen is the leader and where there are such frequent changes, the public may view the ‘ship’ as being directionless,” Mr Ravi Philemon, a former NSP member, told TOC.

“From that perspective it is not in NSP’s interest to have such frequent changes,” he said.

Mr Philemon questioned if the party stalwarts, who seem to wield much control in the party, are ready for progress or new ideas which might take the party forward.

“If you observe, all these former party sec-gens are not party stalwarts, but people who had joined the party fairly recently before they were elected as sec-gens,” he said. “So one theory [for the high attrition rate of sec gens] could be that the newer recruits to the party have a different view of how the party should move forward, which could be in contrast to how party stalwarts feel on that topic. That could be one reason for the frequent changes.”

It is also rumoured that the party elders, who are getting on with age, see the next elections as their last opportunity to even contest the GE, and are obstructing internal changes which might or would require them to make way for new blood.

With the next elections less than 2 years away, it would be disconcerting to party members, and indeed its supporters too, that the party seems to be rudderless, as far as leadership renewal is concerned.

The NSP, which was formed in 1987, has only managed to put one MP in Parliament in all those 28 years – and even then, it was only a non-constituency MP.

But with the constant changes at the top, it looks like the party will continue to lack the stability to accomplish more than this.

The prize of an elected MP seat in Parliament for the party is as elusive as ever, if not more so now.