Those who are in a gay partnership and have children, unlike their heterosexual counterparts, are sometimes frowned on by others. And for the most part, these same-sex couples probably would just ignore the taunts, the insults and the complete ignorance of some of those who hurl abuse at them.

And abuse was what met Olivia Chiong and her wife, Irene Chiong, when some came to know of their baby girl, Zoey Chiong.

The couple had married in San Francisco’s City Hall.

However, instead of ignoring the abusive comments online, or getting angry at them, the couple chose to address them head-on, with an article – titled “A Letter To Our Favourite Hate Group” – on their website.

The title of the article is in reference to the homophobic Facebook page, “We are against Pinkdot in Singapore (WAAPD)”.

Pink Dot is the annual celebratory event by the gay community held at Hong Lim Park to celebrate “the right to love”.

The event has attracted an ever-growing number of participants and supporters since its inception in 2009.

The next instalment will take place this Saturday, and for the first time, the organisers have invited Prime Minister Lee Hsien Loong to the event. The PM, however, has not replied to the invite.

Referring to some of the comments apparently from those at the homophobic Facebook page, the Chiong couple said, “Unfortunately, there are some people in the group who continue to misunderstand our family, so I thought I would take this chance to address some of their comments and also commend them on their very helpful suggestions.”

They then went on to address, one by one, some of the abusive suggestions, and derogatory allegations made against them.

The couple responded with sarcasm and humour, which makes for a compelling read, as they also shed light into their personal lives.

For example, to a comment by “Peter Shee” that the couple “should go to jail for their crime” of “[robbing] somebody’s else’s baby and the baby’s true identity”, the couple wrote: 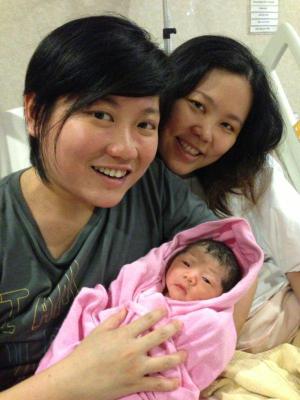 Dear Peter Shee, I am happy to let you know that Zoey is a well-adjusted and well-liked child in her school. In fact, her teachers often comment that she is a delightful child whom everyone likes. She has no psychological/emotional problems to speak of and the only problem she has is she is quite messy when she eats and gets food everywhere. I’m also confused on why you think we robbed somebody else’s baby. Unless you mean the doctors and nurses at KK hospital made a mistake and switched her with some other baby at birth. If not, I’m pretty sure she is the baby that I carried for 9 months and came out of me. Do you know something that I don’t? As for going to jail, I’m not sure we’ll enjoy it in there. After all, I hear the food issn’t great and we don’t get Facebook. Add to the fact we haven’t done any crime so I’m pretty sure we don’t belong there. Since you are so convinced that we have committed a crime, why don’t you make a police report? I’m sure the police would be very interested.

Same-sex marriage was in the news recently when PM Lee said that Singapore was “not ready” for it. His comments came about two weeks after the Irish people voted overwhelmingly in a referendum to allow such marriages in the country.

But in Singapore, not only are such marriages not allowed, the couple which has children in such a relationship faces further obstacles when they have a child.

Indeed, this was precisely what happened to the Chiongs when Zoey was born, as Olivia wrote in another post on the website:

“Given that we are in a lesbian relationship, in the eyes of the law, I had given birth as a single mother. Irene took the paperwork down to the registration desk at KKH and was told I had to personally go to ICA to register Zoey’s birth. This rule is so incredibly stupid, I cannot even begin to express my anger at it. It is hard enough to be a single mother with less support and help than other mothers. If you had a c-section, you would be a single mother, recovering from surgery with a newborn and you still need to go to ICA just to register said newborn. This is all because the government wants you to swear in front of a notary public that you are a single mother before allowing you to register a child who is born outside of marriage.”

But Olivia and Irene are aware of these obstacles which they will face in Singapore.

Nonetheless, they are undaunted.

“Life is not meant to be lived in fear,” Olivia wrote on the website. “I believe in living my life the way I want instead of living life the way others expect me to. Sure, we may face some obstacles along the way, but how can you know true happiness if you have not had to fight for it? As humans, our emotions play a big part in the ups and downs of our lives. Happiness is a state of mind that can only be achieved if you have known sadness. It is all relative.”