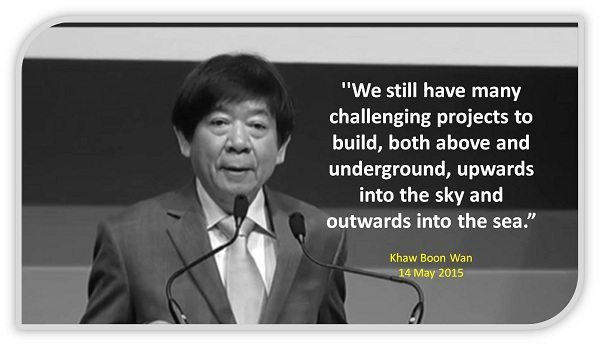 Singapore needs “to innovate and push the frontier of construction”, the Minister of National Development, Khaw Boon Wan, said on Thursday.

This was because the city-state faces new challenges in the built environment the next 50 years, although what it has achieved in the last 50 was something to celebrate.

“How should the sector respond to these new challenges?” Mr Khaw asked in his speech at the Building and Construction Authority’s annual awards ceremony.

“Obviously, we need to build more efficiently and to make better use of technology,” he said. “We need to be more imaginative in creating new solutions to overcome these very difficult challenges.”

Mr Khaw highlighted some ideas which have been implemented in various housing developments which serve different purposes.

For example, CapitaLand and its architect, RSP, have consciously set aside a dedicated Family Zone at Westgate shopping mall, with family-friendly amenities, for the very young and the very old.

12 of Mapletree Group’s Green Mark projects are rated Gold and above.

“Together, they save more than 53 million kWh in annual energy consumption,” Mr Khaw said. “This is enough energy to power nearly 10,000 Singapore households for a year.”

Also, a way to overcome the tight labour shortage was to have entire rooms or apartment units complete with finishes and fixtures “be produced in factories off-site and then installed on site in a Lego-like manner.”

“But it is not more of the same,” he said. “Each generation of BTO flats improves on the previous generation.”

“We have built a lot in Singapore,” Mr Khaw said. “But we still have many challenging projects to build, both above and underground, upwards into the sky and outwards into the sea. We will need strong skills and new capabilities in engineering, technology and design.”

In the meantime, 500 disgruntled buyers of the new Trivelis Design, Build and Sell Scheme (DBSS) flats in Clementi met at a dialogue session on Thursday night.

They are unhappy over the poor quality of their new flats, after they received their keys in January.

It is reported that 413 out of the 888-unit development are affected by the defects.

These complaints include shattered shower glass panels and narrow common corridors that are prone to flooding, and “kitchen cabinet dimensions that do not allow for a standard-sized oven to be fitted, pole-system wardrobes that lack shelves, defective stove knobs, stain-prone kitchen countertops and rusty dish racks”, and exposed sanitary pipes and water heaters which were not depicted in the showflats.

DBSS flats are supposed to be of a higher quality than regular public housing flats.

Some of the residents told the media they were hoping for monetary compensation for the defects in their flats, while others asked if the Housing and Development Board would provide assistance on the matter.

The developer of the flats, EL Development (ELD), had earlier declined to attend Thursday’s dialogue session, saying that it preferred to liaise with each affected owner individually.

The dialogue session was organised by a residents’ committee which was set up to look into the matter.

“As each resident has his/her own issues that may be unique to their units, it would be more fruitful for us to communicate to them directly,” ELD said in a statement. “We prefer that they email or call us and let us know their issues and we will try to resolve them or explain to them our reasons for not resolving them. However, as some of these residents may not be satisfied with the response from us, we will be working with the RC to address them.”

As for the request for a “recourse package”, the developer dismissed this.

“There were requests from the committee for a recourse package during the meeting, but we did not agree as we felt that we should not be liable as we have built Trivelis in accordance to specifications and approved plans,” it said. “However, we are willing to discuss with the committee about how we can assist the residents out of good will.”

This is not the first time that buyers of new flats were unhappy with the quality of workmanship of their units after receiving their keys.