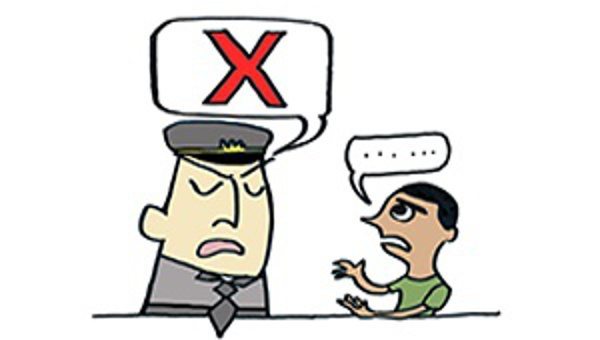 Bangladeshi worker Jamal Uddin was claiming unpaid wages of up to $3000 but ended up being paid only $500 after MOM’s initial intervention.

Jamal who hails from Bangladesh came to Singapore for a job as a construction worker. His employment stint here, however, was cut short when he made a bold move and filed a complaint against his employer for underpayment of salary.

“I received much less than promised. I talked to my supervisor and boss, still no change in salary,” says Jamal, who turned to Ministry of Manpower (MOM) for help as a last resort.

But the support he was looking for was not to be found. “My officer said nothing is wrong with my salary. He said everything is okay. He only listened to my employer talk. He didn’t want to listen to me talk,” explains Jamal with a disappointed look.

He was further disadvantaged by the fact that he had not received a single salary slip as proof of the wages paid to him.

At the conclusion of his case, Jamal received $500. Jamal understood this sum to be payment for his previous month’s work and expected a further inquiry into his case. It thus came as a shock when he found out that his employer told him the $500 was to be the final settlement and he had to leave for Bangladesh immediately.

To make matters worse, Jamal had signed settlement papers without fully understanding what they implied.

“My translator at MOM didn’t explain so I didn’t know I signed settlement papers. I thought I was signing to show I received money,” Jamal told us despairingly. Jamal decided to challenge the finality of the settlement but was at a loss on how to proceed. In bureaucratic procedures such as this, all parties involved, including foreign workers, should be permitted to have a copy of pertinent documents they have signed at the Ministry of Manpower.

Jamal visited MOM several times to try and claim the rest of his unpaid salary. “The officer told me my case was closed. I should go back to Bangladesh. I said I cannot go back. I need to work. I haven’t sent a single dollar back home,” he recalls anxiously.

Jamal could not see the fairness in settling for $500 when his employer was withholding a large portion of his hard earned money.

Upon Jamal’s request for help, HOME appealed on his behalf for his case to be reviewed; Jamal was ordered by MOM to return the $500 immediately if his case was to be processed any further. Jamal, who by this point had sent most of his money back home, had to raise the sum to re-open his case.

As Jamal continued pursuing his case, he had to worry daily about where to get his next meal and how to pay rent now that his employer has kicked him out of his dormitory.

This common practice, of abandoning workers who have filed complaints contravenes the Employment of Foreign Manpower Act. Divisional Director Kevin Teoh, of MOM’s Foreign Manpower Management Division, proclaimed in March 2014, “The Employment Act clearly places the responsibilities of housing and feeding work permit holders on their employers. This includes the interim period when they wait for their complaints to be sorted out.”

Furthermore, Mr Teoh also ascertained that “there is no ban on a worker seeking alternate employment [during the interim period] as long as he has gained approval from MOM.”

While there is no explicit ban, it has not been easy for Jamal to figure out how to seek approval for further employment. “I ask my new officer how I can work again. He said he can only help me with my salary problem,” says Jamal, who had to struggle to find ways to support himself and his family.

He had little choice but to rely on HOME for financial assistance and counselling to make the wait less agonising.

Employers who fail to pay their workers, or even pay them less than what was agreed is a common problem faced by migrant workers who approach Humanitarian Organisation for Migration Economics (HOME) for assistance.

The Employment Act ensures that workers do not have to deal with non or underpayment of salaries. For instance, employers are required to notify their foreign workers of official wages in the In-Principle Approval (IPA) letter – a document workers receive before they depart for Singapore. Additionally, Part III of the Employment Act requires that workers be paid the correct salary on a monthly basis and are entitled to overtime and public holiday pay.

However, when these regulations are not consistently enforced, foreign workers such as Jamal have to deal with a different reality.

To support HOME’s work with workers like Jamal Uddin, please go to http://home.org.sg/donate/

For just US$7.50 a month, sign up as a subscriber on The Online Citizen Asia (and enjoy ads-free experience on our site) to support our mission to transform TOC into an alternative mainstream press.
Tags: civil societyMOM

‘Illegal employment’ and ‘unacceptable accommodation’ are most common offences by employers in CMP sectors: MOM