Local bookstore, Popular, has apologised for a tweet it posted on Thursday seemingly poking fun at 16-year old Youtuber Amos Yee who was assaulted on the same day while making his way to the State Court.

The unidentified assailant had slapped Amos Yee in the face and fled.

He has since been arrested by the police and is reported to be a 49-year old man.

The police did not disclose his name.

Popular Book Company, the owner of the bookstore, had tweeted: 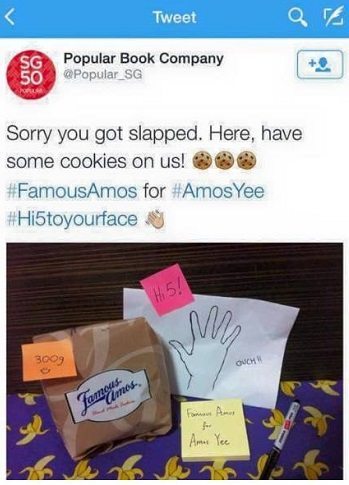 Soon, members of the public criticised the tweet, calling it insensitive and that it trivialised a serious incident for self-serving commercial purposes.

According to the Straits Times, the tweet was removed shortly after and Popular posted a new tweet, which said:

The next day, however, as news of the original tweet spread online, the bookstore issued an apology which said:

“It was a mistake that we accept and sincerely apologise for. We promise that we won’t do it again. #saynotoviolence.”

The assault on Amos Yee has drawn criticisms, including from non-governmental organisation, Maruah, and Law Minister K Shanmugam, who said it was “quite unacceptable” and called for the person responsible to be dealt with by the law.

Some, however, have given it apparent approval, including from former Straits Times editor, Bertha Henson, who wrote in a blog post that she “got vicarious pleasure from seeing the slap administered” to the teenager. (See here.)

In the meantime, police investigations into the assault are ongoing, and it is unclear at the moment what, if any, the assailant will be charged with.