S’pore flag left on the ground, how many will pick it up? 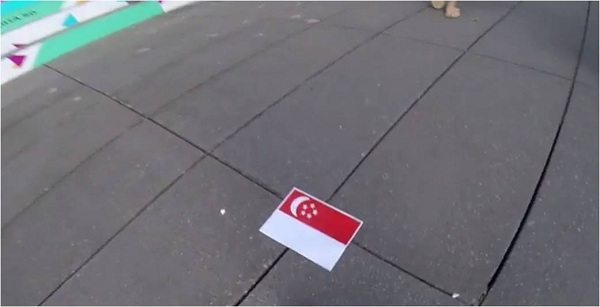 In a social experiment to see how Singaporeans and the public would react, 22-year old student Ben Matchap placed an A4-sized copy of the Singapore flag on the ground at a busy public pathway in Dhoby Ghaut.

Matchap, a student at Lasalle and a parkour enthusiast, then had his friends help him record the scene from different angles as people walked where the flag was.

In the video recording, which Matchap said was about 10 to 15 minutes of the total time the flag was left on the ground, no one picked up the flag, although one man did stop, but only to take a photo of it on his electronic device.

Singaporeans’ respect (or lack of) for the flag was also a matter of public controversy after the National Day Parade celebrations.

The flags were seen left behind on the ground and even in rubbish bins, along with other trash, as The New Paper reported:

Here are a few more examples of how shabbily the flag was treated: “Police investigating toppled Singapore flags”.

As Singapore celebrates its 50th year of independence, how much do Singaporeans really feel about the country?

This, arguably, may be reflected in how much they respect or how they treat the national flag.

The Online Citizen (TOC) asked Matchap about the experiment and how he feels about what he saw.

The Online Citizen (TOC): What is the motivation behind the video/experiment?

Ben Matchap (BM): Amidst all the hoohah about Amos Yee being disrespectful I noticed that Singaporeans become very patriotic whenever someone has something negative to say about us, whether it is warranted or not, like in the case of Amos Yee and Stephanie Koh.

I wanted to see just how patriotic Singaporeans are. Would anyone pick up the flag? Would they avoid it? Would they just not care?

TOC: Can you tell us some details of the experiment – like, how long did you leave the flag on the floor, where did this experiment take place, how many people do you think walked past it?

BM: So we did this for about 10-15 mins. It was an A4-sized flag. I wanted it to be noticeable yet avoidable. I had a few friends help me record it from another angle. I am guessing about 50 people walked past it.

TOC: What do you think the results say about our attitude towards the flag?

BM: I think Singaporeans just don’t care enough. Some of them saw it and avoided it, but no one bothered to pick it up. I think the flag and our pledge are taken lightly by Singaporeans.

We sing the songs, say the pledge and wave the flag. But most of the time we are just going through the motion. No one wanted to make a conscious decision to remove the flag from the sidewalk.

TOC: What do you hope this video will do?

BM: I hope this video will stir up a discussion about what it means to be Singaporean and make us question ourselves a little more.

TOC: Some people may feel you are denigrating the flag by doing this social experiment. What would you say to them?

BM: Yes I did put the flag on the floor. But people could have picked it up. I guess it’s a pretentious artistic reference to how when people put us Singaporeans down we scream bloody murder instead of “picking ourselves up” and responding in a dignified manner.

TOC: What does the flag mean to you personally?

BM: It is a symbol of our nation. An idea. How accurate it is though is up for question.

TOC: Why do you hope for Singaporeans to treat the flag with more respect?

BM: I only hope for Singaporeans to be more aware of what they are doing. No action is still action. I want Singaporeans to know that they CAN make a difference and that they have an active part to play in shaping Singapore.