At a specially convened session of Parliament to recognise Mr Lee’s 60 years of life work in helping build the nation, Mr Low described the former as “an extraordinary political leader born out of that turbulent and uncertain era.”

Mr Lee had “traversed among the big countries and promoted Singapore’s values to them and the potential benefits that Singapore could provide.”

“He had won the respect of the leaders of these major powers,” Mr Low said. “Without his efforts, our economy could not have been successful and Singapore could not have achieved its status and its living space today.”

However, Mr Low also tampered his accolades with a word a caution – that Singapore’s progress was achieved on the back of sacrifices made.

“I don’t think that the PAP one-party rule is the key to Singapore’s fast economic development, and strong social cohesion,” Mr Low said. “This is because many Singaporeans were sacrificed during the process of nation building and policy making; and our society has paid the price for it.

“This is why Mr Lee is also a controversial figure in some people’s eyes. He crafted policies based on the situation then, and made rational judgment out of the interests of the country.”

This nonetheless does not mean that the choice and the implementation of policies should just be based on purely pragmatic considerations.

“[It] should also take into consideration human nature and their sensitivity,” Mr Low explained. “Only by doing so can we avoid hurting people’s feelings and creating resentment. If accumulated over a long time, that resentment could become a potential political crisis and affect people’s unity and their identification with the country.”

Mr Low’s remarks seemed to have sparked a mini-rebuttal from one of Mr Lee’s parliamentary colleagues. 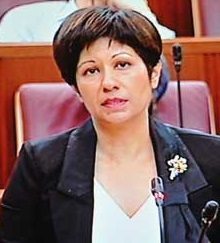 Indranee Rajah, an MP in the late Mr Lee’s constituency of Tanjong Pagar, seemed to have taken umbrage at Mr Low’s remarks about how “many Singaporeans were sacrificed during the process of nation building and policy making.”

“It was not people who were sacrificed but the things which would have made us a lesser people, a lesser country than we are today,” she said, without mentioning Mr Low or his speech.

Singapore gave up “laziness, corruption, division, hatred of other races”, she added.

“The other kind of sacrifice we were asked to make, was to set aside divisions and animosity in the interest of national unity,” Ms Indranee said.

She seemed to have misunderstood what “sacrifice” means which, basically, is to give up one good for a greater one.

And most would agree that laziness, corruption, division, hatred, animosity are not “good”, and indeed these are things to be eradicated, not sacrificed.

Channel Newsasia also picked up Mr Low’s point just minutes after he had delivered his speech in the House.

He said Mr Low was not wrong in what he said because “the initial decades of independence saw a trade-off being made between individual freedoms and political space”, among other things.

“But what I think is not controversial is that those sacrifices paid off,” Mr Devadas said, without elaborating.

“And the recognition that sacrifices had to be made is being given today through the Pioneer Generation Package,” he explained.

“A very tangible $8 billion that recognises that that generation did the most and perhaps got the least [out of the] progress of Singapore because by the time we became far more affluent than when we started they [were coming] to the end of their working lives.”

Mr Devadas said that Mr Lee never denied that sacrifices had been made.

“It’s in his books and in his speeches and I think to his credit he was always upfront with saying that there’s a price to be paid, and if we elect to enjoy present pleasures without paying that price, then we have the certainty of paying a higher price in the future,” he said.

Both Ms Indranee and Mr Devadas seemed to have missed completely what Mr Low was driving at, which was a deeper and more profound point – that while Mr Lee had had to make and take decisions based on pragmatic considerations at the time, governance cannot be based just on pragmatism alone.

Because if it were, and if governance was devoid of humaneness or compassion, this will lead to resentment which in turn could break society apart.

This was the point Mr Low was making, and it is an entirely valid and serious point.

While he did not mention specific incidents or names, one would guess that Mr Low was referring to (perhaps at least in part) the political detainees whom Mr Lee had incarcerated under the Internal Security Act (ISA), some of whom had spent decades in detention, without ever being formally charged in a court of law, let alone be allowed to defend themselves in open trial.

To sugar-coat such serious matters by saying it was instead “laziness” and “divisions” which we were asked to sacrifice, and that we are somehow making up for the sacrifices through the Pioneer Generation Package now (even though we have been prosperous many years ago), is to wholly ignore the other side of the Singapore story – the sacrifices of those, besides the victors, who had also played their part in the building of our nation.

Indeed, it is also to do Mr Lee a great discredit to try and whitewash what he himself had openly admitted.

“There were moments in 1964 and in 1965 when we felt that perhaps we were going the way of so many other places in the world.”

“We have departed in quite a number of material aspects, in very material fields, from the principles of justice, and the liberty of the individual.”

“620 criminal detainees… 100 of whom are murderers, kidnappers and armed robbers.”

“To let them out would be to run the very grave risk of undermining the whole social fabric.”

“[There were 620 criminal law supervisees, men] on whom the due process of law were unable to place even an iota of evidence.”

“[Lee admitted that all this was true.] We have had to adjust, to temporarily deviate from ideas and norms. This is a heavy price. We have over a hundred political detainees, men against whom we are unable to prove anything in a court of law… Your life and this dinner would not be what they are if my colleagues and I had decided to play it according to the rules of the game.

So, to conclude, Mr Low perhaps was saying that those days of “temporarily deviat[ing] from ideas and norms” are over, and that government today should be more humane, wiser, and open, to prevent the disintegration of society because of seething resentment which could result from the iron-fist method of rule.

And indeed, this is a timely reminder to all of us – that while we express gratitude and respect for Mr Lee at this time, it is also important to see the many facets of the man in perspective, and learn also from his mistakes, and not just from his successes.