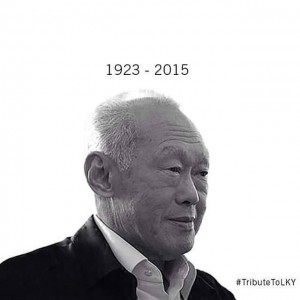 Mr Lee Kuan Yew was Singapore’s first Prime Minister. He held the reigns of office for 31 years, from 1959 to 1990. During this period, his team of capable ministers enacted policies that brought great wealth and prosperity to Singapore. While credit must be given to him for the unprecedented social and economic progress that Singapore made during that period, the same credit should also be shared by the old guard and his outstanding team of politicians and leaders, including luminaries like E.W. Barker, Hon Sui Sen, S. Rajaratnam, Toh Chin Chye and Goh Keng Swee, to name but a few.

Mr Lee was a great orator. From young, I was always impressed by his public speeches and his strong command of the English language. His delivery was crystal clear, and his words chosen with an exquisite precision. One could always feel his energy in his voice, as well as the strength of his convictions. His political savvy, his shrewdness, and his political cunning were so beautifully and powerfully combined that I never failed to be impressed.

Mr Lee loved his wife very much, and their marriage always served to inspire me. In a society often dominated by conventional and restrictive notions of gender and marriage, it is heartening to hear of stories such as those of Mr Lee and his wife, Kwa Geok Choo. They gave strength to each other. They completed each other. Each party in that marriage reached his or her full potential only with help of the other. In that sense, theirs was the perfect marriage. In a world increasingly dominated by crass materialism and the pursuit of the fleeting, Lee and Kwa’s marriage from 1947 to the latter’s passing in 2010 is a beacon of light and hope to all those who aspire to more worthy ideals, especially in the areas of love and romance.

Mr Lee Kuan Yew was responsible for bringing enormous economic growth to Singapore, for raising the standard of living tremendously, and putting a roof over everyone’s head. He was also responsible for political incarcerations of his opponents, detentions without trial under the ISA, the silencing of dissenting voices using the law, and creating a climate of fear and political oppression. The best way to remember the man is to study history carefully, remember him for both the good and the bad, and learn the vital lessons that can be gleamed from his illustrious political career.

I believe that Mr Lee and his capable team built Singapore only with the help of countless thousands of hardworking and self-sacrificing citizens. These are the people whom we should really cherish and remember in this time of mourning. Singapore is the collective work of millions of brave souls through the generations. Let us remember that always.

This article was first published on Ng E-Jay’s blog, Sgpolitics.net, and is exclusively republished on TOC. We thank E-Jay for his contribution.