WP’s “human error” nothing out of the ordinary

On 26 January, Monday, the Workers’ Party Aljunied-Hougang-Punggol East Town Council released its findings on the service and conservancy fees rate of arrears owed to the town council. (See here.)

It found that there was an error in its September 2013 report of the amount of S&CC arrears – 29.4 per cent.

This was a mistake because the sum of arrears had actually declined from the previous’ month’s (March, 7.4 per cent) but the percentage submitted for April had ballooned to 29.4 per cent.

“Unfortunately everyone did not notice the anomaly in the April 2013 report that was later published in the Town Council Management Report,” AHPETC said. “We acknowledge the oversight, and regret the error in reporting to HDB.”

The town council said the data had to be “extracted through manual sorting and counting”, which had resulted in some “human errors” in the computation and aggregation of the arrears.

“In the aftermath of the withdrawal of the then-computer system in 2011 [by the PAP], that was the only way for AHPETC to comply with the aggregated arrears reporting requirements from MND until AHPETC’s own system could be enhanced. AHPETC was thus submitting arrears reports to HDB late,” AHPETC explained.

The 14 PAP town councils had decided to sell the computer system to its company, fully-owned by the PAP, Action Information Management (AIM).

“AHPETC acknowledges that this manual process is not the most ideal and efficient way of doing aggregated arrears reporting, as the data size is voluminous,” AHPETC said.

It added that such a method was “tedious and subject to reporting and human errors.”

“The arrears rate of 29.4% for April 2013 submitted to MND was an instance of reporting and human errors,” the town council said. “An additional step of sorting to avoid double-counting of the same household was inadvertently omitted.”

Apparently, both the Ministry of National Development (MND) and the Housing Development Board (HDB) had missed the error as well and did not detect it after the AHPETC had submitted the data to them.

Several ministers had also used the reported 29.4 per cent figure to attack the WP.

If indeed the issue is one of “human error’, and this seems in fact likely, it would not be anything out of the ordinary.

Over the years, government ministries and departments, even our security agencies and People’s Action Party (PAP) town councils have also cited human errors as the cause in various incidents.

Here are 14 recent notable incidents where “human errors” were fingered as the cause.

2007: The Ministry of Law submitted a memorandum to the Public Accounts Committee explaining that “the omission of a land parcel from the certified listing was due to human error by two officers of the Singapore Land Authority (SLA).” (See here.) 2007: The Straits Times reported that a 3-room flat in Jurong was being rented out for S$2,500. It attracted attention because the amount was seen as rather high. However, after blogger Alex Au (http://yawningbread.wordpress.com) investigated and found that the sum was actually for two, and not one, 3-room flat, ERA Singapore – which had supplied the Straits Times with the information – described the mistake as a “human error”. The incident prompted the then Second Minister for Home Affairs, who accepted the shortcomings, to also say that “the best of systems are not immune to human failures”.

“To the best of our knowledge,” the minister said, “no country or organization has succeeded in achieving zero failure. Occasional individual lapses and failures will happen from time to time.”

2008: Retiree Ang Heng Soon, 61, checked in at the Tiger Airways counter using his son’s passport, which he had grabbed by mistake in his hurry to catch the flight. Mr Ang nonetheless managed to clear 4 security checks, and boarded the plane.

It was only when he had reached Ho Chi Minh City in Vietnam that Mr Ang himself realised the mistake. He notified the immigration authorities there and was put on a flight back to Singapore.

Then Minister of Home Affairs, Wong Kan Seng, later said: “I have been reminding officers of the need for vigilance repeatedly after each lapse of human error. Obviously the message is not sinking in deep enough to the last man.”

2010: “In October this year, a Singaporean Chinese woman and her Caucasian permanent resident husband discovered that their baby’s blood group did not match theirs,” the Straits Times reported. “The baby’s complexion was also markedly different from theirs. More bad news was to follow when a DNA test showed that the baby wasn’t biologically related to the husband.”

The Health Minister later explained that there was a mix-up in the process and that “the mix-up was due to lapses in procedures and human error.” (See here.) 2011: Vandals breach the security fence at the Bishan MRT depot. The train operator attributed this to a “security lapse, which took place due to human error.” (See here.) 2013: A fire broke out at the Bukit Panjang Internet Exchange which belongs to Singtel. The fire lasted an hour and “crippled essential services from banking to health records retrieval across Singapore.”

“It sparked a slow-burning fire that went undetected as a result of further fire safety lapses and human error,” the Straits Times reported. (See here.) 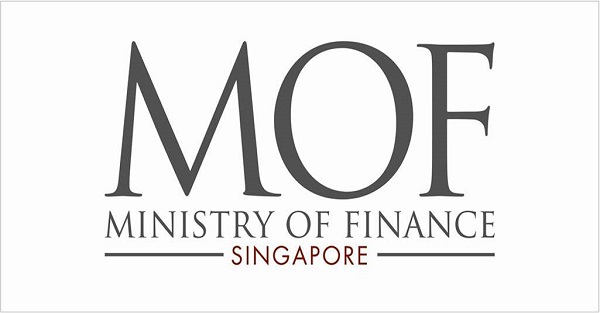 2013: The Auditor General, in his annual reviews of the ministries, found numerous errors or shortcomings in procedures and procurements. When asked in Parliament, the Deputy Prime Minister and Finance Minister, Tharman Shanmgaratnam, said:

“[In] a system with 80,000 procurements each year, we cannot realistically expect to eliminate all lapses or human error. To seek to do so would be too costly and time-consuming, not just to Government but also to businesses and the public.” (See here.)

[Note: The WP had to manually sort through 70,000 S&CC accounts to find the error in its S&CC arrears rate.]

2013: In its report , the Public Accounts Committee highlighted some shortcomings in the Ministry of Environment and Water Resources (MEWR).

The MEWR informed the Committee that NEA had taken the following measures to prevent  the recurrence of the lapses which it apparently also attributed to “human error”.

2013: “The Australian clothing retailer Cotton On said… that it was ‘human error‘ that led to 10 advertisements for jobs here being posted on its website calling for Malaysian citizen or permanent resident applicants.” (TODAY)

2014: January – “RAIL operator SMRT yesterday explained the causes of three recent disruptions on its train lines, saying two were due to human error, and the third, equipment failure.” (Straits Times)

And finally, we come to the “human errors” cited by PAP town councils for various incidents. 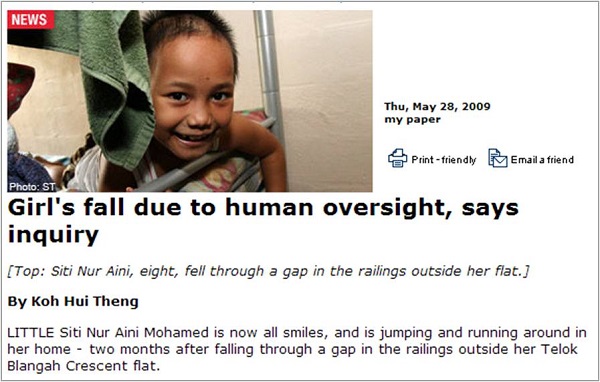 2010: Eight-year old Siti Nur Aini Mohamed fell 4 storeys through a gap in the railings outside her Telok Blangah Crescent flat.

An inquiry “absolved the Tanjong Pagar Town Council of any blame and found that there was nothing wrong with its maintenance programme and telephone feedback system.”

“It was ‘human oversight’ which was to blame,” the inquiry found. (See here.) 2012: “Residents in Ubi recently saw a notice put up by the town council that was riddled with mistakes,” Insing.com reported. “The notice was put up by the Marine Parade Town Council at Blk 319 in Ubi Ave 1.”

“Written in both English and Chinese, the notice contained only two lines of Chinese text which surprisingly contained more than ten mistakes, as pointed out by residents.”

“A spokesperson from the town council clarified that the mistakes were the result of a human error and the staff neglecting to check the notice after it was printed.”

2014: In November 2014, the Ministry of National Development released its Town Council Management Report (TCMR). Among its findings, it found that:

“In one quarter, Chua Chu Kang Town Council did not transfer the correct sum to its sinking fund due to calculation errors.” (See here.)

It was also the same TCMR report which had graded the WP’s AHPETC “red” for “S&CC Arrears Management”.

The grading now seems to be incorrect.

Now that AHPETC has clarified that its S&CC arrears rate is in fact quite normal, instead of the almost 30 per cent earlier reported, one wonders if the MND and the HDB, and the ministers who were attacking the WP over the matter, will be rational and see that human errors are in fact nothing out of the ordinary, as one can see from the above examples.

In the meantime, let us not make wild allegations or accusations, as some ministers have unfortunately done, without first ascertaining the facts.