On Wednesday, 21 January 2015, the Government announced an increase in public transport fares by 2.8 per cent.

As with previous increases, the news was met with anger from the public, especially given the fall in oil prices by 50 per cent worldwide.

On Saturday, Prime Minister Lee Hsien Loong was asked about this in a Facebook chat session.

Ms Alanna Si Jia Tan had asked Mr Lee “why is it that our transportation cost keep on increasing?” [Sic]

“Every year they increase and we do know that sbs transit earn huge profits for their pockets,” Ms Tan said.

To this, Mr Lee replied: SBS Transit runs a fleet of some 3,200 buses, and it also manages the North-east and Downtown MRT lines.

It has indeed been reported that its bus operations have been bleeding red for some years.

However, Mr Lee’s first statement – that it is not true that SBS Transit earns huge profits – is not borne out by the facts.

Over the years, in fact, SBS Transit has been making healthy profits.

Here are its earnings (after tax) for the years from 2001 to 2010. Figures from its annual reports: 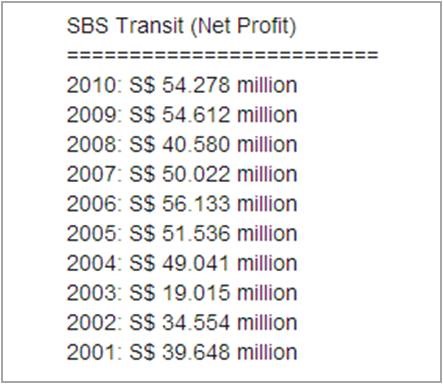 They look pretty huge and healthy.

And how did SBS Transit do in 2014? Here are what the news reported, of the first 3 quarters’ financial results:

Here’s what the Straits Times said: Even its parent company, ComfortDelgro, has been breaking profit records: The question which should be asked, therefore, is why are its bus services making losses when its other services are not.

And also, should taxpayers subsidise, through government grants and higher fares, one part of a company if it does not make money while its other parts do?

In any case, contrary to what Mr Lee says, SBS Transit itself is and has been making healthy profits all this while.