Where have all the IBs gone – Part 3: Their cause and its effect

By Terry Xu
We have earlier discussed about the evolution of the People’s Action Party’s Internet Brigade (IB), and how a casual observer can better identify them to ascertain their subversive intent.
While it might seem trivial that any attention should be given to those who have nothing better to do than disrupt discussions online, we need to consider the broader impact of their activities and why it is beneficial to citizens as well as policy makers to completely disband the IB.Some readers have asked if there are any similar IBs who support opposition parties, if their activities online might counter those of the PAP IBs, or if such actions might lead to a greater polarisation of the online space.
Spreading falsehoods, or a falsehood in itself?
Prime Minister Lee Hsien Loong once remarked that only unhappy people go online. By this, we can infer that he meant people who are unhappy with PAP’s policies. Indeed, for argument’s sake, let’s just assume that the much generalised group of what the IBs would like to refer to broadly as “opposition supporters” are always commenting on Internet forums because they are either angry at the government over certain policies or over the current state of affairs in Singapore.
If so, then why would those who are really content with how Singapore is run, and are effectively living the good life as a consequence of the government’s well-thought policies, have reason to quibble with those expressing the opposite? Why are their Facebook postings all about how “silly” or “naive” the “opposition supporters” are, and why are they defending government policies so aggressively online, despite the fact that mainstream media is already doing a stellar job informing the masses of the benefits of said good life? Why aren’t they spending their time with their family and friends, given that the majority of “happy people” are already a forgone conclusion, but choose instead to enter into debates with others online, to defend the policies of the government or the actions of certain political leaders? The answer might be found if we go back to what some PAP leaders have said in 2007:

“It was necessary for the PAP to have a voice in cyberspace as there were few in the online community who were pro-establishment, he said. As such, the committees aim to ‘observe how new media is developing and see how we can use the new media as part of the overall media landscape’, he added. ‘How do we facilitate views that are pro-party and propagate them through the Internet?’

The approach reflects comments by Rear-Admiral (NS) Lui at the PAP’s party conference in December. He called on younger activists to put up views ‘to moderate the vitriol and balance the skewed comments’ on the Internet.”
In fact, a study of the comments made by such online supporters of the PAP would reveal this mode of “engagement” by the PAP’s “voice in cyberspace” to be a regular practice – not only for a single post, but a pattern established through the account holder’s history.
Posts tend to be overtly supportive of the PAP, its leaders and its policies, to the exclusion of everything else.
Now, such views are not in any way wrong – we are all entitled to our own opinions. But it becomes an issue when such views are masquerading as the genuine sentiments of the ground, expressed repeatedly on public platforms, which gives the false impression that they are merely “to moderate the vitriol and balance the skewed comments” online.
At times, the views expressed are also out of place, and seem little more than an attempt to seize every single opportunity to push a point in favour of the ruling party. Examples from Part 2 of this series will show how innocent looking the comments are, leading to suggestions that they are expressed by a regular citizen providing his/her opinion on the issue.
Again, as suggested in Part 2, clicking through to the profiles would reveal the authenticity of their social media accounts.
Isn’t there an opposition IB that will respond?
When the first two parts of this series were published, a number of readers asked about IBs who support opposition parties, which might serve as an effective counter, or a tit-for-tat “equalising” function. This preposition is not new. We have received such queries from time to time.

There are no doubt accounts created by individuals who aggressively support opposition views or denounce the ruling party that bear the same mark as PAP IBs.
However, clicking through to the profiles of these individuals would usually reveal that they are not used purely to post anti-establishment comments.
For instance, you can do a search on some of the profiles of those who have voiced out in support of opposition parties compared to those who voice against oppositions and in support of the ruling party, as indicated in the images below.

In fact, these users have the semblance of “real life” account holders, with a “life” beyond participating in politics online. They have choosen not to appear online with their real faces and names for the sake of privacy, or for a sense of security that they will not be singled out and castigated for their comments. This sense of security is unfortunately false, as some individuals have found themselves in the middle of online attacks, simply for choosing not to reveal their identities. 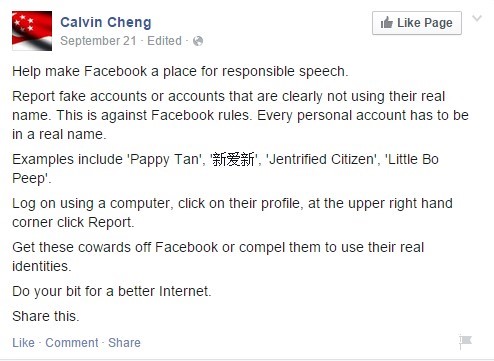 There are also two other factors that suggest that a proper and organised – with the possibility of being paid or rewarded – IB for opposition parties does not exist.
First, no opposition party leader had openly asked their members and supporters to fight on every (cyber)street corner.
Second, a close scrutiny of the kind of co-ordinated attack on opposition parties that we see across online platforms hardly exists among those who go online to support opposition parties or express anger at the PAP. Although there are cases where this might appear to be so – such as the case of Roy Ngerng being sued by PM Lee – such efforts at defence pale in comparison to the efforts and coordination by supporters of the establishment.
Net effect: Astro-turfing
The net effect, then, is an online narrative that is heavily skewed towards the views of PAP IBs. IB online activism tend to revolve around instances where the political stakes are high, such as the reputation of the PM or a Minister, or for key government policies. Granted, this does not happen on every single piece of news or online content we see, but the bad thing is that it happens on issues that matter the most to the nation.
There is also no telling when such activism will be ramped up. Perhaps nearer to the general elections?
This effectively makes our piece of cyberspace rather unhealthy for the casual user, who would be in all likelihood take such views to be those of the “average Singaporean”. Clearly, they are not. Co-ordinated online attacks by PAP IBs are meant to skew perspectives through sheer numbers, or divert attention from the actual policy issues by antagonising those who voice displeasure at these policies.
Such efforts by IBs are best described as astro-turfing, and while on their own harmless, such activities have the potential to disrupt a proper assessment of public opinion on issues and policies, be it by other citizens or policy makers.
More importantly, given that the PAP has clearly voiced no qualms about their IBs hiding behind the vile of anonymity to swing public opinion in the party’s favour, the question to ask would be whether the PAP has actively sanctioned such activities, or is merely unaware of the effect that such activities have in social media.
Where has all the political leadership gone?
Ironically, for all the chest-thumping about anonymity online, the PAP Ministers and MPs purportedly behind the IBs have not made any form of protest against such activities or requested for them to “come clean”. Has the political leadership effectively lost control of what might have evolved to become an online splinter group of vigilantes fighting to defend the “truth” about how great Singapore leaders are in reality?
Of course, they might be then excused for not taking to task a bunch of loose cannon they have no means of controlling. But for identifiable platforms that openly support the PAP, the establishment similarly did nothing.
While Ministers and MPs criticise bloggers for “taking issues out of context” and misleading the public with information, the fact that pages like FAP and FLOP continue to operate in a manner which seeks to demean opposition members and its supporters through misleading headlines and quotes taken out of context, with no word from the PAP MPs, is a double standard by itself.

A month or so back, FAP’s Jason Chua apologised to Abdul Salim Harun for posting an image of him with falsified information, in an attempt to discredit him. Abdul Salim Harun was tagged by a fake account, Jin Zheng (profile no longer accessible), which some suspect to be a pseudo account of Jason Chua himself. The apology came after Abdul Salim Harun made a police report against FAP for harassment.
Let us also not forget who shared the photo of the CPF lady’s residence on their page, trying to lead public to think that the lady is not telling the whole truth. No MP spoke about this nor exclaimed their astonishment at the antics of such fanpages.
To be fair, no one is stopping supporters of the PAP from expressing their views in public forums. Decisive and deliberate astro-turfing by IBs, on the other hand, prevents the public and policy makers alike from understanding ground sentiments. The PAP is actually not doing the government any favours by allowing this to happen.
More importantly, members of the public need to be aware of the presence of such entities so that they would not be misled on issues and matters in Singapore.
Being aware of the Internet Brigade would allow us to take a step back from their vitriol and focus on the social discussions that can help shape Singapore the way it should be.
Part 1: Evolution of PAP’s online counter-insurgency
Part 2: Catch them if you can