Where have all the IBs gone – Part 2: Catch them if you can

By Terry Xu
It is clear that the ruling People’s Action Party’s (PAP) Internet Brigade (IB) is still around and active. From its original “coming out” in 2007 to the latest announcement by a key Cabinet Minister of the need for the PAP to “fight at every street corner” just last year, we can surmise that there is still a group of online activists, paid or unpaid, that the PAP have trawling cyberspace and looking for opportunities to “set the record straight” for the party. This can be done openly, or at times from the cover of anonymity.
A site like The Online Citizen, where one is most likely to find views critical of government policies, would inevitably draw attention from the IBs to do their work. We accept that as part of online discourse, although not necessarily as a good type of discourse, as this essentially amounts to astro-turfing and false pretence of the public response to government policies.
Nevertheless, TOC’s close proximity to the IB allows us to interact with them frequently. This gives us an opportunity to carefully study their online activities. What we can see is that there are essentially two different groups of IBs – a group of fake accounts run by individuals who aim to sway public opinions using the illusion of mass support; and another group of individuals who are either “self-radicalised” in fanatic support for the administration or personally involved in the grassroots or relevant agencies.
There is no indication if either of these groups are paid directly for their efforts, like China’s Fifty Cents party. However, there is reason to believe that there are benefits for individuals who choose to use their online efforts to build a reputation as a staunch advocate of the ruling party.
Facebook accounts that are clearly “fake” (Comment thread in Channel News Asia’s facebook post of “Wealth of ultra-rich in Singapore grew by 7% to US$523 billion last year: Report“. Guess who is the odd account out?)
Understanding the motives of the IB is only one part of the equation. The key thing to note for any online user is how to spot them, so that their views can be taken for what they are: Dogmatic support for the ruling party which need not have any semblance to the real ground situation, much less associable with any real person making the claims.
Fake social media accounts are fairly easy to spot – the best way for any social media user, new or veteran, is to look at the (im)poster’s Facebook profile. The first indicators is, of course, the lack of a clear profile picture or one that uses someone else’s picture.
The fake user might also use an image of a celebrity, a photo grabbed from the Internet (regardless of how stringent one might be on Facebook with his/her privacy settings, there would be certain images which are publicly accessible, which are then “borrowed” by IBs) or a meaningless graphic for their profile picture.
Indeed, TOC has witnessed some really strange instances, such as a user who “borrowed” the image and name of an American Satanist.

Next, click on the person’s profile and you will realise that this individual has only a couple of likes – mainly on social-political fanpages – and barely any friends. If any, their friends usually include fellow fake accounts that are just as active trolling similar social-political sites and fanpages. (Sadly, a few well-known individuals also practice this bad habit of accepting unknown individuals as friends – generally not a good practice by any standards of social media etiquette, so why do they do it?)
Another tell-tale sign is the date of creation of the account. Some accounts are created as recently as the day of the comments made, without the hesitant beginning posts made during the “familiarisation period” of a new account holder. This indicates that the real user is already familiar with social media and that the account you are looking at is likely to be one (of many) that the user has created for purposes other than as their personal account.
To note, some IBs might also set their date of account creation to private, particularly if this has been pointed out to them as a signal. However, this is not the usual practice of a casual user, which is a sign that you might also wish to note.
An IB would also attempt to “humanise” his/her fake account by “populating” it with friends or likes. However, a fake account is notable for having few friends, few likes or many likes that are not “natural” – that is, all likes are to social-political pages or centre or around a particular interest groups. These interest groups are easy to click on since they are suggested one after the other.
Facebook accounts of real individuals
Now, not all IB accounts are fake. There are accounts manned by real individuals with real profiles, but are no less virulent and dogmatic in defending government policies and the actions of PAP leaders.
Are they paid? Not necessarily, and nor is there a need to. Understandably, a stauncher supporter of the government would likely be within the selected circle and beneficiaries of the products of the status quo, and they would hence have a vested interest to keep it that way. Moreover, they would also want to build a reputation as a staunch supporter, to entrench their position in these circles.
Such named individuals would also openly associate themselves with certain PAP Members of Parliament or organisations, to strengthen their online credibility.
Take for example Abdul Malik Mohammed Ghazali, who formerly got into trouble for writing about burning YOG organisers during the Youth Olympic in Singapore. The once die-hard opposition supporter and former Singapore Democratic Party candidate has turned to criticising opposition parties. Apparently, he did not learn his lesson, and continued to get his hands burned – this time, in the threats he directed at Roy Ngerng and company. However, Malik soon took the post down, claiming that he was advised by Minister of State, Teo Ser Luck to do so and tagging Mr Teo to the facebook post. 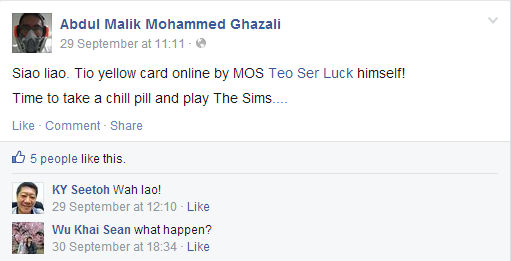 Mr Teo neither acknowledged nor denied the allegation by Malik when asked by TOC a month ago on 20 October. However, this time round, Malik did not get any police warnings regarding his online threat.
Time is of the essence
Real or fake, all IBs have one common characteristic: They respond fast to opportunities for supporting the PAP or denigrating its opposition. For instance, look at the post below about Channel News Asia’s coverage on Workers’ Party and its Aljunied Hougang Punggol East Town Council. You will notice a group of individuals throwing attacks at the opposition party within minutes of the posting and with clear signs of an organised angle of attack. These are also people commonly found frequenting anti-opposition/pro-PAP fanpages such as Fabrications About The PAP (FAP) and Fabrications Led By Opposition Parties (FLOP).
This is clearly not the behaviour of common citizens who are expressing their opinions, but a deliberate attempt to mud-sling the political opposition and sway the opinion of the common folks online. By flooding a forum with comments as soon as possible, IBs aim to command the conversation through sheer number of posts.
At times, this response carries on at times where social media activity is usually less frequent – during working hours or at night. Not the case of IBs, as they continue with their “engagement” vigorously as and when the opportunity arises.
Would any individual, regardless of their political inclinations or views, bother to engage in such vigorous confrontation, often on a 24/7 basis, with a persistently one-sided narrative?
We are able to identify IBs from the slant of their comments, although that is not the only basis. Granted, any individual is entitled to his/her own opinions based on political beliefs, and has the right to express this in any platform or way that he/she chooses.
But we can better identify IBs by looking at how they approach and create their online identities; the affiliations they keep with the power elite and other IBs; and more importantly, the intensity, frequency and tenacity which they use to attack views not in favour of the PAP. Understanding and distinguishing these qualities will help us navigate our online environment that is increasingly polarised and virulent.
Part 1: Evolution of PAP’s online counter-insurgency
Part 3: Their cause and its effect