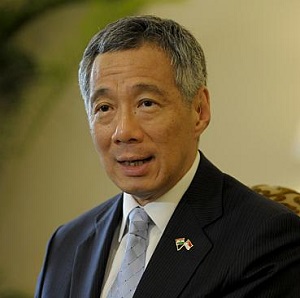 In his first direct comments on the global effort to combat the Islamic State (ISIS) militants in the Middle East, Singapore’s Prime Minister Lee Hsien Loong says Singapore has not “reached a point of making a decision yet.”
The global effort, backed by some 40 nations and international organisations, is led by the United States, which have taken a more active role in pushing back the Islamist extremist group after two Americans journalists were executed by the militants.
In the last few weeks, countries in the North Atlantic Treaty Organisation (NATO) and the Arab League have pledged support for the initiative.
Mr Lee’s remarks come after Indonesian President, Susilo Bambang Yudhoyono, and Malaysian Prime Minister Najib Razak, condemned the ISIS last week for its brutal actions, and for being un-Islamic.
Both leaders had also called on its citizens not to support the extremist movement.
Mr Lee said, during a trip to Hong Kong, “We are happy that the Americans have taken a stand … This is a threat to people all over the world.”
But on whether Singapore would join the global effort to snuff out the ISIS, Mr Lee said, “How we can support the American-led effort? That’s something we can discuss. We have not reached a point of making a decision yet. Even how the Americans are going to pursue this and what they’re going to do, they haven’t quite decided yet.”
Echoing what Singapore’s Deputy Prime Minister, Teo Chee Hean, and Defence Minister, Ng Eng Hen, had said in recent weeks, Mr Lee said Singapore is “exposed too”, referring to the threat ISIS poses to the world.
“So we have to take it seriously,” Mr Lee said.
But Mr Lee said that it won’t be easy to stop ISIS.
“It’s not one of those situations where you can say, those are the bad guys, let’s knock them out,” he said.
It was a sentiment expressed by US President, Barack Obama, as well in September when he addressed the American people on his decision to “degrade, and ultimately destroy” the ISIS.
Mr Obama had said that it “will take time to eradicate a cancer like ISIL”, using the group’s other name.
Mr Lee said that “[even] how the Americans are going to pursue this and what they’re going to do, they haven’t quite decided yet.”
“You’re talking about 30-something thousand fighters, they command a very substantial piece of land, they have resources. They’ve got oil,” he said, referring to the large swathes of land which is currently under ISIS control in Iraq and Syria.
“And they were also fighting the government in Syria, which, (until) very recently… was seen as bad guys. (They’re) also fighting against the Iranians.
“In the Middle East, things are never so simple and you can’t come riding in on a white horse, knock out the bad guys and tomorrow, peace breaks out,” Mr Lee said.
The Singapore government has also disclosed in recent months that some Singaporeans have answered the call by the extremist group to join them in their fight, and have gone to the conflict zones to do so.
In July, the government disclosed that several Singaporeans, including at least one family, have joined up with ISIS.
Malaysian authorities have also revealed that plans to set up a regional caliphate by extremist sympathisers in the region included Singapore.

For just US$7.50 a month, sign up as a subscriber on The Online Citizen Asia (and enjoy ads-free experience on our site) to support our mission to transform TOC into an alternative mainstream press.
Tags: ISISLee Hsien Loong