By SY Lee and Leong Sze Hian
We refer to the article “Household incomes up, rising most for the bottom fifth” and  ”Resident households spending rose, on higher quality and more expensive goods, services” (Straits Times, Sep 18).
Bottom fifth households had biggest gains in incomes?
The former states that “Average monthly household incomes have risen across the board, with households in the bottom fifth seeing the biggest gains, according to the latest Household Expenditure Survey.”
Reading the above headlines and the content of the articles may give one the impression that the bottom fifth of households may be much better off.
Spend 10% more than what they earn?
However, according to the Household Expenditure Survey 2012/2013 report – the lowest 20% households average monthly household expenditure at $2,231 is higher than the average income of $2,022. 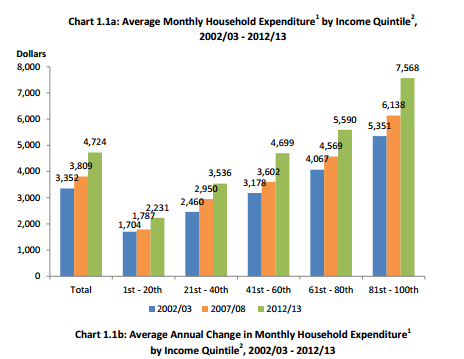 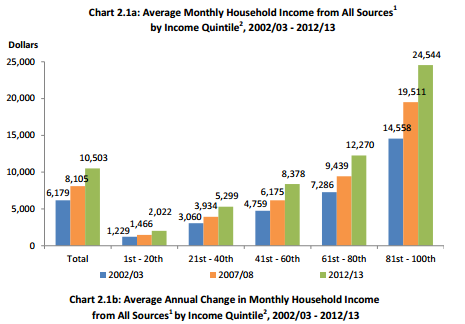 Does this mean that the lowest 20% households were spending about 10% ($2,231 divided $2,022) more than what they earned?
Disposable income even worse at more than 10%?
Moreover, as income is including employer CPF contribution, and regular government transfers such as Workfare Income Supplement, the bulk of which is not in cash, and accounted for 9.3% of total incomes – the gap between income and expenditure may be even greater from a disposable income perspective.
Most people may not know?
If you didn’t read the entire 325 page report, you may be non the wiser as to the plight of lower-income households.
What’s the point of highlighting that the bottom households’ incomes rose the most, without mentioning that they actually don’t earn enough, relative to what they spend?
As the bottom 20% is 214,628 households – we may be looking at about 800,000 household members who may be struggling to make ends meet.
All households’ net incomes grew 0.9%?
Since the Average monthly household income from all sources rose by 5.3 per cent per annum in nominal terms between 2007/08 and 2012/13 – and average household expenditure rose by a lower 4.4 per cent per annum – does it mean that the net increase in income after expenditure is only 0.9% (5.3 – 4.4%)?
As inflation was 3.1% per annum for the 5 year period – does it mean that the net real increase in incomes for the households after expenditure is a negative minus 2.2% per annum?
If so, then the real net increase in incomes was about a negative minus  11.5% for the past 5 years.

More attention at goodwill and less at the trolls