Protest organiser fined, but how do police decide on protests?

Jacob Lau Jian Rong, a former claims officer, was fined S$1,000 on Tuesday for organising a public procession in support of the “million mask march Singapore” in November last year.
Mr Lau, who admitted in court to the charge, had also wanted the protest to oppose new Internet regulations which the government had announced earlier that year.
The million mask march was a global online movement which had called for a 24-hour global protest on Guy Fawkes Day against issues ranging from corruption to the rising cost of fuel.
The court heard that Mr Lau used various social media platforms to organise the event on 5 November.
Mr Lau had asked for participants for the march to gather at Hong Lim Park on the day itself.
However, the police later issued an advisory that it was illegal to organise or take part in a public assembly without a permit.
When Mr Lau arrived at the park, he found that the march had not happened as planned, and after speaking to some of the participants there, the march was apparently postponed to the evening of the same day.
Supporters of the march were to dress in black or red, wear a Guy Fawkes mask and to march in groups of four to prevent the public calling the police over a big group marching together.
When Mr Lau showed up at the City Hall MRT station and met nine others there, with all attired as advised, and one of them wearing the mask, the police moved in and arrested all of them before they could proceed with the march.
In court, Mr Lau’s lawyer pleaded for leniency and said that Mr Lau “has learnt his lesson the hard way.”
The maximum penalty for such an offence is $5,000.
The incident is similar to one which happened in 2006, involving a group of supporters of blogger Mr Brown, or Lee Kin Mun, as he is also known.
Mr Lee had been writing a weekly column for the TODAY newspaper at the time. His article, titled, “Fed, up with progress”, which dealt with various issues at the time such as the cost of living and and means testing for special school’s fees, drew stinging criticism from the government.
The then Ministry of Information, Communication and the Arts (Mica) accused him of “distorting the truth” and that the article contained “polemics dressed up as analysis”. (You can view the letter here: “Distorting the truth, Mr Brown?”)
A short while after the incident, the TODAY newspaper was reported to have terminated Mr Lee’s stint as its columnist.
The termination created outrage and cries of protest from supporters of Mr Lee. On 7 July that year, a group of about 30 people, dressed in brown, showed up at the City Hall MRT station as part of a flash mob in support of Mr Lee. [Picture right] The show of support had been organised through SMSes.
According to a Straits Times report then:
“Some police officers were on patrol at City Hall MRT yesterday but they did not approach any of the people dressed in brown or tell them to disperse. By 2.20pm, people began wandering off, and by 2.40pm, it was over.”
However, other online reports said the police later questioned the group and took down their personal particulars and started an investigation into the incident.
About 2 weeks later, the police said that it would not be taking action against the 30 people because there was “no breach of public order.”
While Mr Lau had admitted to organising a march and a protest against government Internet regulation, it appears that the march in fact did not happen, as the police had arrested the men before they could move off.
It is thus unclear how Mr Lau could have “committed offences against public order”, when the flash mob in support of Mr Lee was deemed to not have breached public order.
The march and the flash mob, incidentally, both took place at the same venue of City Hall MRT station.
Over the years, the police’s decision to allow or not allow public protests and marches seems to be made arbitrarily and, to some, inexplicably.
For example, in 2007, the NTUC was allowed to hold a public protest-cum-march downtown to mark World Consumers Day. 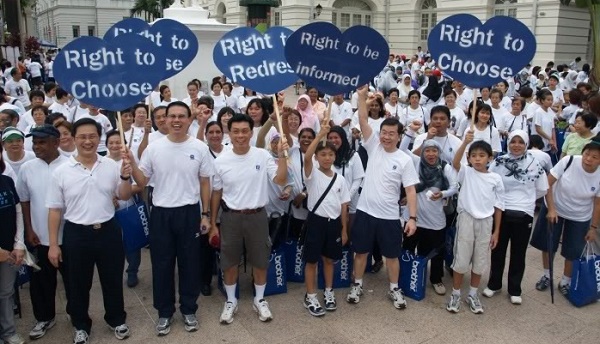 The Online Citizen (TOC) reported then:

“From the pictures on its website, the event seems to be a rather big one, attended by a large crowd of supporters. Captions accompanying the photos include: “The crowd surging forward” and “The placard-holding crowd..”, “The rain fails to dampen the mood of the crowd”, and “CASE Executive Director Mr Seah Seng Choon holding a placard”. (See here)
“A closer look at the pictures reveals men, women and children taking part in the event – complete with custom-made umbrellas, goody bags for the participants and even placards with various slogans.”

However, when the Singapore Democratic Party (SDP) applied for a permit to hold a similar event the next year, also on World Consumers Day, its application was rejected.
[Read here: “A case of double-standards?”] More recently, questions were also raised about how two similar events were treated differently by the police.
In 2011, activist group Singaporeans for Democracy had applied to hold an anti-racism rally at Hong Lim Park – but the police denied it a permit for the event.
But in August this year, an anti-racism run, organised by the government-affiliated OnePeople.Sg, at Marina Bay Sands was allowed to be held, where a reported 5,000 participants turned up.
[Read here: “Anti-racism events – how do police decide?”] How do Singaporeans know that the law is being applied fairly, consistently and rationally when it comes to these things?
Why is one event allowed, while another is not? Why is one event against the law, while another is not?
It would be good for the authorities to perhaps explain some of these decisions so that Singaporeans can know where the law actually stands.
For example, what action, if any, was taken against a PETA activist who stripped down to her underwear in a public area in March this year to hold a protest against Air France outside the airlines’ office in Anson Road? And why were two Singaporean activists arrested when they similarly protested outside the MOM building in 2009 over work permit issues for some of their Burmese friends?