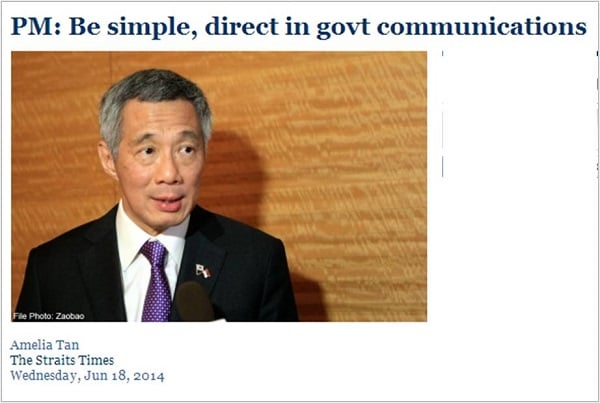 3 years after the general election of May 2011, Prime Minister Lee Hsien Loong continues to call on politicians and civil servants to keep it “simple and direct when communicating with the public.”
“Avoid management speak or big words which will not impress anyone,” Mr Lee said on 18 June. “Use simple language which people can understand.”
His advice was posted on his Facebook page, in response to an article in the Financial Times about the use of “business gibberish” by tech company, Apple.
Mr Lee said ministers and civil servants have tried to do just that – be direct and clear in their communication with the public. However, they have not always been successful, Mr Lee admitted.
He then suggested that a website should be set up “to collect examples of poor government communication in an effort to help it improve.” (See here.)
3 weeks after Mr Lee’s call, his Education minister, Heng Swee Keat, on Monday urged the same.
Referring to how the government has communicated new policies and schemes such as the Pioneer Generation Package (PGP) and the Medishield Life scheme (ML), Mr Heng said the government has to “simplify the communication.”
Since the announcement of these schemes and programmes, concerns have been raised by members of the public and from Members of Parliament that the details of these were too complicated or complex for the average recipient or beneficiary to understand, leading to uncertainty about what exactly these schemes are trying to achieve.
Indeed, Minister in the Prime Minister’s Office, Grace Fu, said on 6 June that the grassroots organisations and MPs “have their work cut out” in trying to explain the details of the PGP and the ML to the public, in particular to the senior folks.
The question to be asked, however, is why has the government found it hard to communicate such policies and programmes? Why has it failed time and again in keeping things simple?
One of the problems identified by Mr Lee post-GE 2011 was how the government had interpreted feedback inaccurately.
“Unfortunately, we may not have picked up and interpreted it correctly, and acted on it the way we should have done,” Mr Lee said then.
While Mr Lee did not elaborate further, one might think that such “misinterpretations” could or would lead to reactions from the government which is dissonant with what the ground feels, leading to a communications divide.
One such example would be the Population White Paper introduced by the government in January 2013.
It was slammed by both MPs and the public for not only the now infamous “6.9 million” population scenario, but also for simple mistakes like describing nursing as a “low-skilled” job, for which Deputy Prime Minister Teo Chee Hean himself had to apologise.
As this writer wrote at the time, “For a document as important as this, a roadmap for a nation no less, it is appalling to see how the government fumbled right from the get go to the eventual vote itself – with the most critical PAP MP, Inderjit Singh, effectively abstaining from the vote when he was absent from the House during the [parliament] poll.”
At a time when questions of “an unprecedented crisis of trust” in the government are also being raised, it is crucial for the government to communicate simply and effectively with the public, especially on important matters.
But how should the government go about doing this?
It takes no genius to say that while policies are necessarily detailed and even complex, they should be kept to simple soundbites for the general public – but at the same time make the details available to those who are interested.
One would suggest, for example, that the Pioneer Generation Package could have been kept really simple, especially when the government is also introducing the new Medishield Life scheme just months apart.
The two schemes, which have to do with healthcare funding and subsidies, put together will indeed confuse with its many details. (See here.)
It would have been immensely better and more easily understood for our elder citizens if, say, the policies were simply this – if you are 65-and above, you will enjoy a flat subsidy of 80 per cent (or whatever the amount may be) for all healthcare needs, whether at the general practitioner (GP), or the polyclinic or the hospitals.
This would have made it really clear and simple.
The problem is perhaps that we are so entrenched in our belief that no one should scam the system that we come up with such complex policies details or safeguards which makes everything confusing – and worse, erodes trust in the very schemes which are suppose to be helping citizens.
It reminds one of how our taxi fares structure has become such a confusing mess that even a minister has to look into how to simplify it!
“[We] recognise that the current taxi fare structure is complex and confusing for commuters,” Senior Minister of State for Finance and Transport, Josephine Teo, told Parliament last November.  “LTA will work with the Public Transport Council (PTC) and the taxi companies to study if and how it could be made simpler and more easily comparable across different taxi companies.” One hopes that the eventual revamped fare structure will be a much easier one to understand, without commuters having to resort to a calculator each time he takes a cab.
As Mr Heng said on Monday, “I don’t think it is possible for everyone to know the full details of every policy, because the design of policies is by its nature complicated, but we have to simplify the communication so that the residents, whom we want these policies to benefit, can avail themselves of these changes.”
But the government should go one step further besides simplifying the communications – it should also simplify the policies.