Winnie, a shop owner at *SCAPE2 in Orchard posted a video on Facebook of a lady taking a mobile phone from a desk in her shop which belongs to her sister.
She wrote:

“My sister Missy Ping had her ‘iphone5S Gold 16G’ got stolen by the lady as captured on my CCTV. Happened on 19 January 2014 8:07pm at our shop HOTSPOT CONNECTION at *SCAPE 2 Orchard Link #02-16. Police report had been made and investigations are going on. We’ll be appreciate if anyone knows her or have her details please leave a comment below…”

In just one hour of posting the video, the lady shown in the video has been identified as “Pinko hanhan” on Facebook by the commenters on the comment thread. 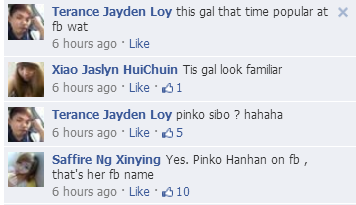 Winnie requested that the identified person to contact her to return the phone to her sister so that she will not pursue the matter any further. 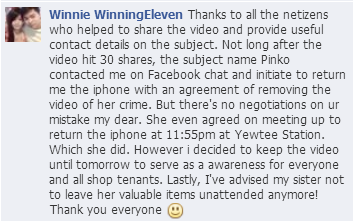 Over one thousand shares of the video has been made on facebook and over 200 hundred comments have been posted on the video thread.
Winnie wrote:

She got cases on shop theft at *SCAPE Underground but tenants are kind enough not to lodge report against her yet she strikes again.

Going through the comments, it seems that it is not the person’s first time getting involved in such an act and people have came out to share how they were her victims as well.

Many commenters in the thread has asked Winnie to follow up on the police report so that “Pinko” can be properly dealt with by the law.
A comment on TOC’s facebook wrote, “Don’t know is she suffering from Kleptomania?…”. Kleptomania is the inability to refrain from the urge to steal items for reasons other than personal use or financial gain.