Not bad by international standards? So what? 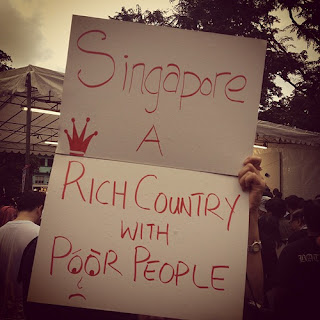 Prime Minister Lee Hsien Loong’s National Day Rally Speech on Sunday has got to be welcomed even if it is just because of his vision to expand Changi Airport, and for his plans for bigger, more efficient ports.

Most Singaporeans will surely support these expansions because these will build on the traditional strengths of what has made Singapore great – connectivity, networking, and so a better ability to play the middleman in the region, and the world.

These are better initiatives than building more casinos or building a permanent motorcar race track, which will only serve to entrench Singapore as playground for the rich, while excluding many citizens from properly enjoying it.

While we applaud these initiatives we cannot ignore what would become of these spaces that will be freed up in Tanjong Pagar and Paya Lebar, and if it is an indication of more of the same.

At least one real estate developer already advises its stakeholders that the Tanjong Pagar port area once freed up, will be a new waterfront city, and that ‘the precinct holds long-term real estate value for discerning homeowners and investors who seek world-class properties with exceptional quality, design, lifestyle and amenities’.

Today we already have the Sentosa Cove  which boasts that their residents come from all over the world to enjoy a unique waterfront living lifestyle, with the azure sea and lapping waves at its doorstep, where its residents can enjoy mooring their private yachts at their very own backyards.

Will Singapore’s prime space freed up in Tanjong Pagar become only an extended playground for the uber rich to utilise and enjoy?

And on the other hand, we have Paya Lebar. One property consultant reportedly said that 50,000 to 60,000 homes can be built in the 800 hectares plot of land which will be freed up by moving the Paya Lebar airport to Changi.

Even if it takes 15 – 20 years to develop the Paya Lebar area one has to ask, what is the necessity for such a build-up? Are we gearing-up for the 6.9 million population, which a recent Government White Paper recently said could be a possibility in 2030?

As one pioneer generation blogger has said – “Already with 5.3 million, the infrastructure is bursting at the seams.”

The Prime Minister said in his Speech, that “even transport, which worries many Singaporeans, we are making progress with new buses, with new train lines, with new free early morning MRT rides into the city. Even our baseline by international comparisons, honestly speaking, is not bad”.

But who cares about international standards when breakdown of trains are almost a daily affair, and despite the Government pumping over $1 billion to improve bus services, public buses still remain overcrowded.

One newspaper report says that the outrage of modesty of women in Singapore has risen sharply this year, with many cases happening on public transport. Are the staggering rise of commuters using our public transport system, which the public transport operators seem to find difficult to cope, one reason for such attacks on our women?I’m not sure if the Prime Minister adequately understands these everyday struggles of ordinary Singaporeans, because his encouragement for more of us to do the same, take the $8 billion Circle Line instead of needing an S-Class, seem to suggest that he don’t.

“The values of homes has appreciated and even poor people are not poor by any international standard.”

“Even transport, which worries many Singaporeans, we are making progress with new buses, with new train lines, with new free early morning MRT rides into the city. Even our baseline by international comparisons, honestly speaking, is not bad.”

Well I guess from declaring to the whole world that “there are no homeless, destitute or starving people in Singapore. Poverty has been eradicated…”, to proclaiming now that by international standards, the poor in Singapore are not really poor, the Government of Singapore has certainly come a long way.

But as chief of National Volunteer & Philanthropy Centre, Mr Laurence Lien remarked in that article, Singapore is “‘not a cheap place to live in. You can have a home; you can have shelter, but it’s still a struggle.”